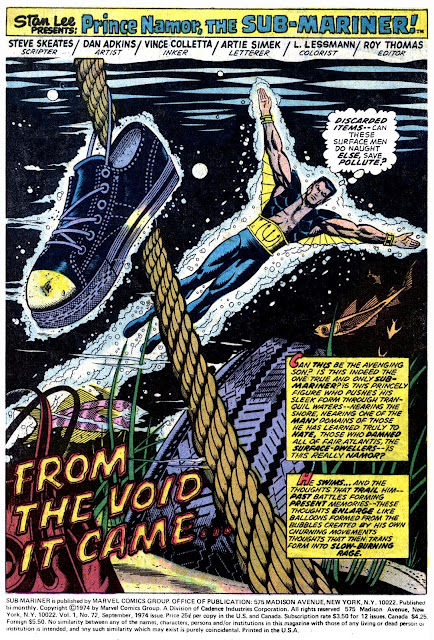 We've arrived at the final issue of the Silver Age Sub-Mariner run and an interesting one it is. The regular team seems to have seen the writing on the wall and left early. Writer Steve Skeates came in and took the opportunity to actually finish up a story that remained unfinished at DC when AQUAMAN was canceled! What were they gonna do, fire him? Former SUB-MARINER inker Dan Adkins came back as penciler and the seemingly always available Vinnie Colletta inked it all up. And a nice job they do, particularly with this splash. Nicely framed and nicely colored, I have no idea why that photo-referenced shoe is so prominent but other than that, a good way to go out.

Namor returned soon afterwards as part of the ill-considered SUPER-VILLAIN TEAM-UP with Doctor Doom and later in a one-off issue of one of Marvel's anthology mags. But in the main, it was over...and in spite of a number of setbacks, I'd have to say the run went swimmingly!
Posted by Booksteve at 12:30 AM