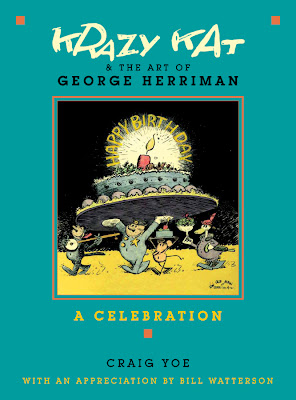 Published by Abrams, technically KRAZY KAT AND THE ART OF GEORGE HERRIMAN isn't a "Yoe Book" at all but it is most definitely a book from Yoe. In fact, this is a book that Craig has been working diligently on for several years, uncovering rare and in some cases never before published material.
KRAZY KAT defies any and all attempts at explanation to those unfamiliar with it. There's this cat, see, and the cat may or may not be male...or female. Either way, the cat lives in an ever-changing desert in a town populated by talking animals and he...or she...seems to have a speech impediment, making her word balloons sometimes virtually unintelligible.
There's also a mouse named Ignatz. Now Ignatz hates the cat and is constantly throwing bricks at the cat's head. Rather than make the cat angry, the cat interprets these as "love taps" and thus pines for Ignatz. Attempting to referee is the local constable, himself a dog who may or may not be smitten with the androgynous cat. That's pretty much the way it was in the newspapers of the first few decades of the twentieth century.
Many loved it, many hated it. The intelligentsia claimed it for their own and the artsy crowd declared Krazy Kat to be more than just another comic strip! And just who was the man behind all this? In a day when comic strip artists were celebrities, George Herriman was a little shadowy. Craig Yoe digs into the reasons why and also shows us Herriman's work away from Krazy Kat.
By way of full disclosure, I did some minor research for this one well over a year ago. It's my understanding that none of it was used in the final product.
Posted by Booksteve at 8:42 PM