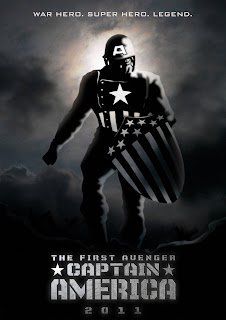 The closest thing I had seen to a bad review of CAPTAIN AMERICA--THE FIRST AVENGER was a single comment referring to it as a "mediocre movie with a few good action sequences." Other than that, nearly everything I've seen from critics, fans, Facebook pals and even people who've never read a CAPTAIN AMERICA comic before could safely be called a rave. Not having been able to see it until its third day of release, I must admit I was more than a little worried that it couldn't live up to what I'd read. Thankfully, I was very wrong.
Flat out, let me state that I consider CAPTAN AMERICA--THE FIRST AVENGER to be not just the most entertaining but also the BEST superhero based movie since 1978's SUPERMAN--THE MOVIE. I was worried about the casting. I was worried when they said he would fight Hydra and not the Nazis. I was worried when they released images of the uniform. I was worried they would screw up my all-time favorite comic book hero on film...for the fifth time!!! None of it matters. It all works!
The 1940's serial featured a hero in a costume that vaguely resembled Cap's. No wings, no shield and he shot a pistol quite a bit. The two 1970's Cap TV-movies had our motorcycling hero with a star-spangled cycle helmet! The highly touted 1990 feature had a Cap that at least LOOKED the part...except for the rubber ears on his hood. It was badly written and directed and went straight to VHS release. A proposed later Broadway musical never even got to tryouts!
But this time, it all works. The key to the whole thing is that they captured Steve Rogers! Chris Evans gives a much more nuanced performance than actors are usually allowed in this type of film and makes you genuinely like and believe in Steve Rogers. That he becomes Captain America is almost incidental.
Likewise, Hugo Weaving does quite a bit more than parrot standard megalomaniacal dialogue as Johann Schmidt, the Red Skull. His makeup is impressive and his rivalry with Steve is given an extra reason for existing that wasn't in the original comics...yet actually works.
There are no losers in the cast. The best performance is by Stanley Tucci as the ill-fated Dr. Erskine but former Batman villain Tommy Lee Jones as Col. Phillips has some classic lines and Toby Jones (no relation), once again looking for all the world like Truman Capote, is surprisingly good as a later Jack Kirby creation, Dr. Arnim Zola.
With a dozen nods to Marvel continuity, some obvious and some for only the cognoscenti, there's never a dull moment as British Agent Hayley Atwell--good in a sometimes fun but thankless role in what is essentially an all-boys play-- leads Steve toward becoming a hero.
When you know going in that in essence the whole film is setting up another movie entirely--next Summer's AVENGERS--you don't expect a lot of cohesiveness to the plot...and yet there is. It's paced well, there's a good juxtaposition of the action scenes and the character scenes and even the inevitable conclusion is played much (let me emphasize here "MUCH") better than I expected!!
Much has been written about the film's muted color scheme, the amazing 1940's New York sets and the seemingly impossible and yet flawlessly accomplished concept of magnificently buffed up Chris Evans himself portraying the skinny Steve Rogers of the first quarter of the film. Deservedly so. That all adds to the joy of this picture. As do little touches like the clever and quick cameo by a totally unexpected superhero near the beginning (did you catch it?).
In the end, though, Chris Evans is what makes it all work. I've seen a lot of superhero movies but more than that, I've read a LOT of Captain America stories over the past 45 years! In CAPTAIN AMERICA--THE FIRST AVENGER, Chris Evans IS Steve Rogers and Steve Rogers really is...Captain America!
BTW--I believe that's a fan poster above but I didn't want to post the same thing others have been posting.
Posted by Booksteve at 3:38 PM