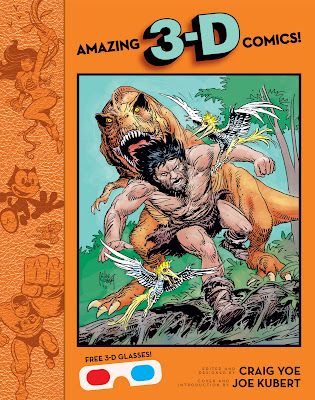 Have you gone to a movie lately? Many of them are in 3-D...again. 3-D films came along in the fifties and then flared up again briefly in the mid-sxties, then again in the mid-seventies. Concurrent with the rise of 3-D movies, though, was the rise of the 3-D comic book, a creature unto itself! 3-D comics seem to have skipped the seventies revival, opting instead for one of their very own in the eighties.
3-D comics were invented in the fifties by the great artist/writer/editor teacher Joe Kubert, his then artistic partner Norman Maurer and Norman's brother, Leonard. The whole story is told in Craig Yoe's new book, AMAZING 3-D COMICS, followed by reprints of dozens of vintage three-demensional comics, complete with glasses!
AMAZING 3-D COMICS is the third of Craig Yoe's new books to make its debut at this year's Comic Con International, going on even as we speak in San Diego. Craig conducted an extensive interview with the still very much with us Mr. Kubert while I, myself, had fun interviewing Joan Howard Maurer, daughter of Stooge Moe Howard and widow of Norman Maurer. Both provided rare illustrations for the book and Kubert even illustrated a brand new "comin' at ya" picture for Craig's typically impressively designed cover!
The reprinted section includes work from, among others, Kirby, Toth, Powell, Ditko and, of course, from Maurer and Kubert!
If you're in San Diego, one of the most talked about panels seems to be this Friday's scheduled panel on 3-D comics with Craig Yoe! Stop by the AMAZING 3-D panel --In actual 3-D with free glasses for all audience members Friday, July 22nd, 1-2 PM, Room 4.
If you couldn't make it out to the Coast, you can order your copy here. It's the same book, in spite of the fact that Amazon has an early, pre-Kubert draft of the cover.
Posted by Booksteve at 5:42 PM