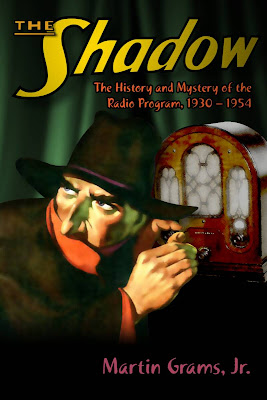 THE SHADOW—THE HISTORY AND MYSTERY OF THE RADIO PROGRAM, 1930-1954, is the latest book from prolific pop culture author and historian Martin Grams, Jr. I hate to say it but I am woefully lax in this review. I’ve had the book for a couple of months now and I’ve started this review a half dozen times at least. Each time it becomes such a gushing piece that I feel I should go back and try to find SOME flaws with it.

By way of full disclosure, Martin Grams is my friend. Sometimes he even pays me to work with him. I worked on this book and I’m credited in the acknowledgements. That said, I was merely one of several who proofread the obsessively complete episode guide listing cast, plots and trivia on more than 700 of the radio episodes! I never saw the actual text until the book was complete. When I did, though, I was impressed…to put it mildly.

At the Cincinnati Old Tim Radio and Nostalgia Convention back in May, I was on the air live with Ken Stockinger and Chris Holm when I said flat out that this book is THE best book I have ever read on any episodic radio, movie or television series…and I have two and a half bookcases of just that kind of book!

I’m here at last with this review to say the same thing to you. THE SHADOW (for purposes of the rest of this review, we’ll just call the book THE SHADOW) is flat out the best, most thoroughly researched, minutely detailed and yet enjoyably readable book of its type that I’ve ever read!

Anthony Tollin is well-known as THE expert on The Shadow of the pulp novels. As fans know, however, the radio Shadow is quite a different animal, clearly tied to the pulps and yet at the same time just as clearly a unique creation.

With that in mind, Martin takes those common origins and follows the fork less travelled as we meet the writers and actors who bring Lamont Cranston and his lovely companion, Margot Lane, to life once a week on the air. THE SHADOW on radio is their story, make no mistake. Much like TV’s Jessica Fletcher years later on MURDER SHE WROTE, being an old friend or school chum of Margot or Lamont just seemed to attract murder! And not just murder but creative and creepy tortures that inevitably led to Lamont using his stupid human trick of clouding someone’s mind. This essentially made him invisible to the killers, pirates, monsters, spies and other assorted bad guys and thus he could elicit confessions, look for clues, make them feel guilty, cause them to commit suicide or just plain shoot them…often seconds before they did away with the hapless but loyal Margot.

That’s what was heard ON the air. Orson Welles, on any movie or radio fan’s short list of the greatest actors of the twentieth century, was Lamont early on. Bret Morrison and Bill Johnstone carried the character for years each. Martin gives each his due along with the actresses who played Margot and many of the great radio character actors who passed through the show. The writers and directors are given credit, also and even the sponsors—so important in radio days—have their histories given!

Martin had to have gone digging through ancient libraries for months on end (sounds like my idea of fun!) to find the absolute treasure trove of illustrations--largely vintage newspaper, promotional and trade ads-- that dot THE SHADOW. While he was there, he found contemporary episode reviews and quotes and those dot both the text and the episode guide.

I once had a substitute teacher in the eighth grade who felt uncomfortable jumping into the middle of what we had been studying. Instead, she brought an LP with two episodes of THE SHADOW, a radio melodrama which, by then had been off the air in new episodes for twenty years. We all enjoyed the blood and thunder. It was something out of the norm for all of us. Personally, though, I was riveted and became a fan of both old time radio and THE SHADOW that very day.

Over the years I’ve read some enjoyable and informative books on radio and learned a lot. THE BIG BROADCAST, TUNE IN YESTERDAY, THE GREAT RADIO HEROES, HEAVENLY DAYS…I’ve also read some marvelous books on TV series, similar in format to this one. If you’ve ever enjoyed an episode of THE SHADOW, if you’ve ever enjoyed any old-time radio, THE SHADOW, in spite of its intimidating size, is a genuinely fun and educational book on what was, at one time, one of the most popular series of them all.

“Who knows what evil lurks in the hearts of men?” I think the answer to that is obvious—Martin Grams.

Posted by Booksteve at 7:48 PM