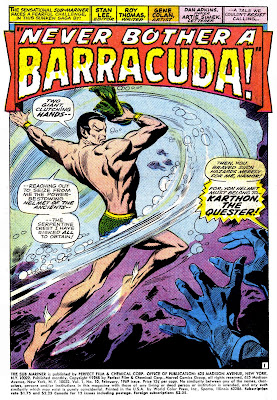 This month we got another new artist...or rather the return of an old one. Genial Gene Colan had been doing romance comics for DC in the early sixties when the opportunity came to do some work for that upstart Marvel company that all the hip kids seemed to like. Not wishing to jeopardize his day job, he initially hid under the pseudonym, "Adam Austin" when he debuted the Sub-Mariner's series in TALES TO ASTONISH. Anyone familiar with his distinctly NON-Kirby style would most likely have recognized who he really was immediately.
Although Colan would be considered one of the best Sub-Mariner artists in the ling run, this is not a great splash page. In fact, Namor's dramatic grab of the Serpent Crown (which would go on to bedevil Marvel characters for years!), looks more like a lovely ballet move here. Adkins remains for some contiuity between artists but he didn't help Colan's oddly thin-waisted Subby in this shot. Note, though, that the head, while still round, has picked up a little of its once and future triangular look by Gene's treatment of our hero's hair...which always seems to stay in place underwater.
Posted by Booksteve at 12:55 AM