Liza With A Z 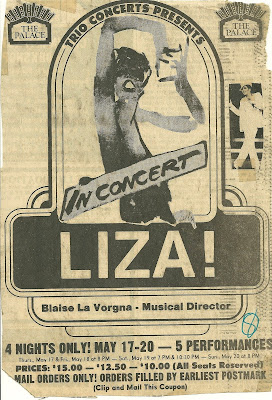 35 years ago, one of my favorite people in the world was Liza Minnelli. This is evidenced by how often she has turned up recently in my journal entires over at A GEEK'S BLOG-1976. I had 5 of her albums--six counting the CABARET soundtrack. I never missed her on television if I could help it and she was on television pretty frequently throughout he seventies. In fact, I still have her on audiotape from THE MIKE DOUGLAS SHOW singing ALL THAT JAZZ from the brief period where she replaced an injured Gwen Verdon on Broadway in Bob Fosse's CHICAGO.
I'm not sure how I became the only completely straight teenage male in seventies America obsessed with Liza with a Z but at some point it happened. I had first seen her on the Oscars when she won for CABARET. That weekend, my mother and I went to see the movie. Some time later, I saw an edited version of THE STERILE CUCKOO on television and was totally in love with her "Pookie." (That sounds awkward....)
In retrospect, I think she jumped the shark around the time of 1975's LUCKY LADY, a horrible and mostly forgotten big budget menage a trois comedy co-starring Burt Reynolds and Gene Hackman. At the time it seemed only a misstep...but it took her a few years to come up with NEW YORK, NEW YORK and even that didn't take as well as it should have. Sinatra co-opted what should have been another signature song for Liza, even! After that, her next big triumph was being second billed to Dudley Moore's ARTHUR.
Along about the same time, she had, like many others, fallen into the hedonistic disco lifestyle of the 1970's. Her films suffered. Her music stopped...for awhile.
1979 saw one of the first of Liza's comeback tours and it hit Cincinnati at the brand-spanking new Palace Theater. I was able to get a ticket for a Sunday show and it was one of the best concerts I ever saw! She was a whirlwind, zipping through rousing song and dance numbers like they were ballads for nearly two solid hours.
In the years since, Liza Minnelli has more or less transformed into another Judy Garland in many ways...most of them not so good. A couple of years ago, one of my employees who happened to be gay mentioned seeing her at the Palace all those years ago. I told him I was there, too, and we exchanged memories of our favorite songs and outfits and such. Then he said, "Wait a minute? You're straight, aren't you?" I said, "Yeah, why?" He murmured..."I don't get it" and wandered away. Sigh. Why must we label everything?
Posted by Booksteve at 10:29 PM