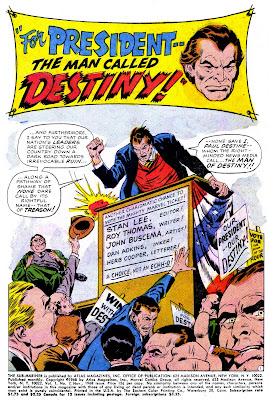 Again this week, no Namor but a striking splash nonetheless. The title of the story is clever in its creative use of blank space. Nice placement of the story's credits, too, with all of last month's creative team returning. One of John Buscema's artistic trademarks is his expressive depiction of the human face. He gets a few here.
In less than a year, the villain Destiny returns, better dressed this time, and now he's running for President. In 1968, that was avery trendy thing to do. Not just Nixon and Humphrey but racist Governor George Wallace, comedian Pat Paulsen and Snoopy from PEANUTS.
This issue had a unique cover, also, with a drawn Sub-Mariner in a black and white photo of a real city.
Posted by Booksteve at 10:05 AM