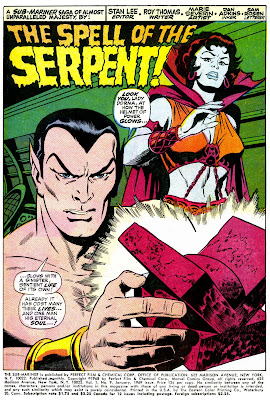 By this point the SUB-MARINER title was certainly maintaining some forward motion but one would have to be generous to say it was hitting an early stride. We have with this issue our first change in pencillers with Mirthful Marie Severin taking over for Big John Buscema. The change would be more jarring if not for Dan Adkins continuing on the inks. In fact, if anything, there are spots in this issue where Adkins style overpowers Marie's.
A good solid splash page though, with a nice closeup of our hero for a change. Adkins is so prominent on this splash (look at Namor's hand) that I only see any Severin style at all on Lady Dorma...and then she looks for all the world like she was inked by Herb Trimpe instead and maybe pasted in later!
Posted by Booksteve at 12:44 AM