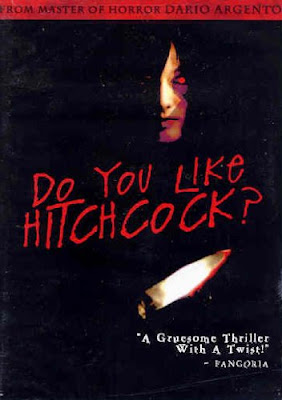 DO YOU LIKE HITCHCOCK? Since the answer to that question has been a resounding "yes" since the early seventies, I wanted to give this 2005 TV movie a try. I'm glad I did. In the tradition of Stanley Donen and Brian DePalma, this time its Italian horror master Dario Argento's turn to "do" Hitch. In his case, he takes it one further and makes the master director's films an integral part of his own.

The basic plot is that a nebbishy young man overhears two women meeting and discussing STRANGERS ON A TRAIN. He recognizes one as a neighbor known for fighting with her mother. When the mother turns up dead, he begins to suspect that the two young ladies have decided to act out the classic Hitch plot! His investigations offer some genuine suspense and some wonderful photography, all set to a lush musical score.

Toward the end, it becomes a bit unlikely as the plot quite literally begins to reenact REAR WINDOW but even then it does so with great aplomb. There's an anticlimactic ending and an opening sequence that's interesting and creepy but seems to go nowhere. Being a TV movie, there's less violence than one might expect from Argento but that actually adds to the Hitchcockian feel. Being a cable TV movie, though, there IS some nudity. All in all, DO YOU LIKE HITCHCOCK? is a worthy addition to the ranks of CHARADE, DRESSED TO KILL and LAST EMBRACE.

Posted by Booksteve at 9:52 PM