The winner of the free copy of Craig Yoe's THE CREATIVITY OF DITKO is Lawrence Loftin! Each entry was assigned a number and I had my son pick a number within the range we had. He then put it back in and continued selecting until he chose a number twice. That was our winner! Here's Lawrence's entry--

"A" means nothing unless you put Mr. in front of it. And get that fantastic comic MR. A!

Lawrence's book will be on its way to him this week. Thanks to all who entered! Here are a few more of the entries we received.

... transcends and ultimately informs our reality. Like wisps
surrounding Dr. Strange, Ditko's universe envelops us. We enter the
dimension he’s created to optimally convey a story. He transports
action and emotion from our world into his. The relocation transforms
these concepts, but as we identify them, we’re changed as well.

As for "A", I assume this refers to Mr. A. So A = A, as per the
reflexive identity property of equality (in math or philosophy). Or A
is answer, as the shadow of The Question.

I like Steve Ditko's work because... It was a part of my children memory. In Quebec, in French we had only old reprint of comics. Most of them was from Kirby or Ditko. Kirby was always the king, but for me Ditko was the "new" guy, the more psychedelic and young.

I like Steve Ditko's work because it doesn't try to be anything more than ART.
Not super-realism, not overdone superhuman musculature, not perfect
recognizeable cityscapes...enough lines to convey what is supposed to be
conveyed. Plus, he has the greatest sense of STRANGENESS!

If you aren't Lawrence Loftin, you can still order your own copy of this great well-reviewed book elsewhere on this page. And don't forget, he said modestly, it's dedicated to yours truly! 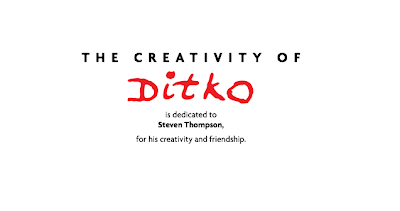