Well here we go. Fans have been requesting (and in a few cases demanding!) a collected book version of my high school journal blog. As of today, it's a live Kickstarter project. The goal is to raise the money to self-publish A GEEK'S JOURNAL--THE BOOK OF THE BLOG in an expanded version. The book will offer more annotation and historical perspectives and as many of the original photos and illustrations as we can legally arrange, all done up in a facsimile journal cover with my geeky senior picture on the front cover (and my still geeky SENIOR picture on the back). 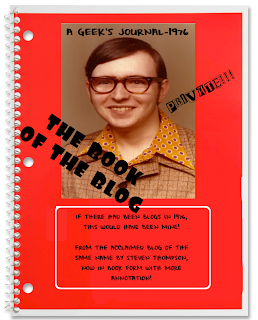 Having always wanted to be a writer, I kept my first journal in 1974 , skipped '75 for reasons I forget, then returned to it in the Bicentennial year of 1976. When I found the journal again a couple of years back, I didn't find it all that interesting. I did, however, feel that much of it read like one of my blogs. I got the idea to actually start a blog reprinting the journal. I thought maybe 3-4 people might read it on a regular basis.

A few days after it started, someone at AOL added a piece on my blog to their front page, complete with the high school picture that my mother never liked. The next day, a few other sites wrote me up including one in Germany. In time, at least 5 other countries published that photo and wrote about my blog in languages I couldn't even understand! When BOING-BOING wrote about me in mid-year, I ended up with six times my regular average monthly readers!

I got comments and a ton of emails--more emails than I've ever received for any other blog, in fact. All of them talking about how they could relate, how they thought THEY were the only ones who thought some of those thoughts or watched some of those TV shows or sat alone wondering if they'd ever have a date. Here I had been in 1976 feeling so alone, not realizing that it was a shared experience. So many others--male and female--were feeling just like me! Who knew?

I've been called brave and courageous for sharing my secret thoughts from 36 years back but it's like I was writing about someone else. I was ashamed then that I masturbated, for example, and constantly schemed to find a way to stop...not considering for a second that probably everyone in school was doing it, too. When I watched a TV special, there were only three networks then. Odds are many folks I knew saw it, also. So many things I never realized we all shared as a common experience.

When the blog ended, I went on, after requests, to do my prequel 1974 blog. But I like the '76 one better quite frankly. And not a week has gone by that I haven't had emails or comments asking why there's no book yet.

Now's your chance to help rectify that. KICKSTARTER is a site that helps raise funds for creative projects. We have 45 days starting now to raise $12, 000 to fund A GEEK'S JOURNAL 1976--THE BOOK OF THE BLOG. If we succeed, wok begins in earnest by August with a goal of having the book released at an affordable price early in 2013.

The way KICKSTARTER works is that if you make your goal--or more--you get the funding. If you're short, however, you get not a dime. If that happens, no book. It's up to you now. We got our first backer twenty minutes after we went live this afternoon. Every dollar counts. While we hope for some larger contributions along the way, it will be the smaller contributions that make the difference.

If you're one of those who has enjoyed revisiting 1976 with me, I hope you'll consider a contribution. If you aren't in a position to do so and still want to help, please talk up the project on your blogs, your Twitter and Facebook accounts and in any forums where you think it might help. It's day one and we're off to a good start. I'd appreciate your support! Thanx!


booksteve
Posted by Booksteve at 2:03 PM