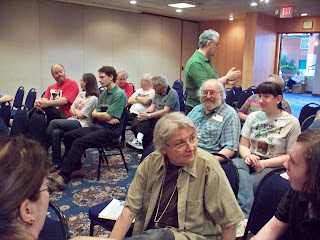 This weekend marks the 26th and final Greater Cincinnati Old-Time Radio and Nostalgia Convention. That final part will no doubt take a while to fully sink in. It may be next year, in fact, when I suddenly realize that after nearly three decades I have nowhere to go at this time of year and won’t be able to see my friends anymore.

Who am I kidding? They’re family. This is, after all, the Convention often described as a family reunion of folks who aren’t related. We differ wildly in our political views, our religious backgrounds, our tastes in clothing and a dozen other things but we all love the pop culture past and we all care about each other.

The story of my involvement with the Con has been told elsewhere on several occasions. Today I wanted to talk about some other people—people I would never have met if not for this annual show.

Joel and Carolyn Senter—The famed Sherlockian entrepreneurs haven’t been attending in ages but I might never have become so involved with it myself if not for them. Carolyn was instrumental in the formation of G.R.A.C.I.E., the re-creation group we belonged to after the second year. She was also probably the best non-professional performer I ever worked with. 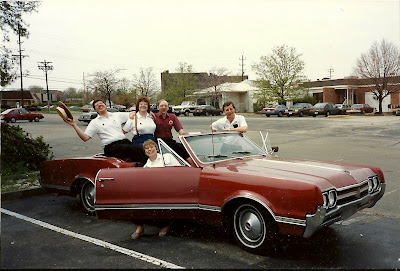 Dan Nather, Karl Lietzenmeyer, Robert and Barbara Newman—the other members of G.R.A.C.I.E. Robert was a major player behind the scenes and he and Barb were for many years the counter team outside the show. 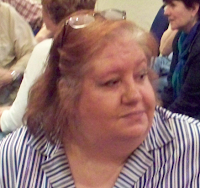 Rene Thompson—My wife of nearly twenty-one years. She was a co-worker who knew little of OTR when I asked her to drive me to the meeting that led to G.R.A.C.I.E. We became a couple and regulars in the re-creations. She would attend while we were engaged, when we got married, while pregnant and even while we were fighting one year (no one knew!). When David came along we became a trio, none of whom ever missed a show. 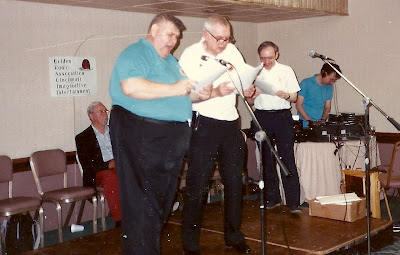 Dave Warren—Brought in by Carolyn to critique our little group early on, “Big Dave” was perhaps the single most encouraging person towards getting me past my natural shyness so I could appear onstage In front of, at times, upwards of 200 people. Years later, after he had passed, Rene and I won the third Dave Warren Award Plaques.

Bob Burchett—The man credited by all with started the Convention and keeping it going. Again, I have never found him to be anything other than encouraging and he has one of the best and most recognizable laughs anywhere. 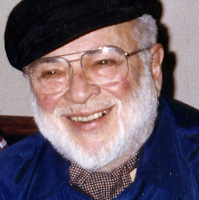 Willard Waterman, Parley Baer, Ezra Stone, Lon Clark and Fred Foy—all passed now but all delightful, friendly men with wonderful stories. I literally grew up watching some of these guys on television and it was so nice to see they were great guys in real life!
Gary Yoggy—Professor Yoggy, although not present these past few years, was always an enjoyable presence, a major player in the re-creations for years and has carried on The Dave Warren Players elsewhere.

Derek Tague—Derek knows more about everything than just about anybody and our annual meetings at the show led to a rest of the year friendship via telephone.

Charlie Stumpf and Carl Amari—the former a now late but well respected radio historian, the latter the controversial founder of Radio Spirits. Both were guests at early shows and both were fun to perform with and talk with.

Don and Mary Ramlow—Mister Director. Don has nurturingly but professionally directed more than 90% of the re-creations I’ve been involved with over the years with Mary as his wonderful Girl Friday (or is she the power behind the throne?). 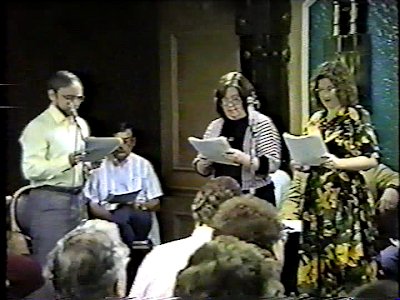 Barney Beck—Delightful, eccentric and a genius at what he did. Unfortunately, what he did was classic live sound effects, a field that no longer existed in real life.

Ken Borden, Sam Levene, Dave Zwingler—all regulars or semi-regulars who livened up the shows from time to time.

John Rayburn—The man with the deepest voice I’ve ever heard, the master of spoonerisms and one of the most fascinating conversationalists I’ve ever met. 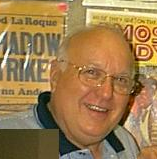 Jim Skyrm—I’d known Jim for years as a customer both at my bookstore and at the local comic book shop. It was always fun to see him every year at the OTR Con but it wasn’t until recently that I realized how instrumental he was in starting the very first one 26 years ago!

The All-Ears Theater group have been a hit for years both in their own performances and Don's. Very nice folks.

Will Hutchins—He told me (and everyone else) to call him Hutch. A wonderful, always underrated actor on sixties TV and in films (including two with Elvis where he stole every scene they shared effortlessly).

Eddie Carroll—The great Jack Benny impersonator and the voice of Jiminy Cricket for many years, he was a joy to perform with and talk with at what must have been one of his final appearances of this type before his death less than a year later.

Tyler McVey and Esther Geddes—Tyler was the very definition of a working actor. Never a star and often unbilled, he nonetheless performed steadily in films and on television for more than five decades and was still performing in his nineties. His lovely, always-smiling wife Esther continued to attend after his passing. 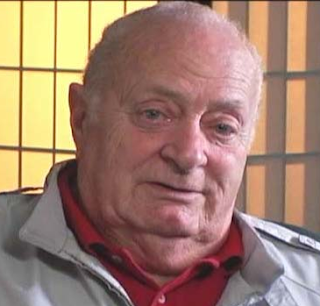 Herb Ellis, Ruth Last, Clive Rice, Shirley Mitchell and Louise Erickson—I didn’t have much interaction with them when they appeared as guests but Ruth played my wife when I was a talking radioactive mouse.

Rosemary Rice—Classy and beautiful, Archie’s radio Betty was a regular from her first convention right up until this past year but had to pull out this year.

Hal Stone—One of my absolute favorite guests! Having played Jughead twice myself, I’ll admit to being a tad resentful that, as the original radio Jughead, Hal would take over that role when he started attending. But we hit it off great and I ended up working with him both onstage and with him directing me. Amazing timing and a sharp wit! 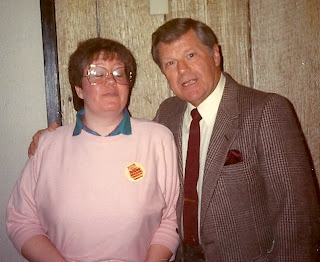 Bob Hastings—Talk about growing up with someone on TV! Dear, sweet Bob. Without double-checking, I’d say Bob attended at least 18 of the 26 conventions. I was often cast opposite him in re-creations and would usually end up sitting next to him. Before his hearing was pretty well shot, we would talk about Archie, Disney Movies, McHALE’S NAVY, the animated BATMAN where he played Commissioner Gordon, ALL IN THE FAMILY and video games he had done voices for. We’d also talk about his bad back, his big family and more down to Earth stuff. I learned more about acting from watching and listening to Bob than from an acting class I took in 1979! I learned how to mark a script and how to always make eye contact and actually relate to the person, not just keep your face buried in a script you’re just reciting. I learned how to pull it all together when you’re feeling down and sore and stand up to the mike and become the character you’re supposed to be playing rather than the character you feel. 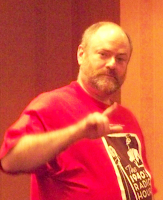 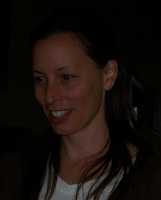 Meredith Grainger—He makes me laugh with but a look or a gesture. A genuinely funny human being and a brilliant performer besides.

Laura Jansen—Does anyone scream as well as Laura? Or what about that little girl voice? Shy but with a big smile and a LOT of talent!

Steve Jansen—Again, it doesn’t take much for me to smile when Steve’s around. Knowledgeable on so many subjects I’m interested in, he’s great fun to be with and talk with and another professional quality performer. And he can rock a hat like nobody’s business!

Mike and Leah Biel-Always fascinating conversationalists on just about any topic and a pleasure to see every year! 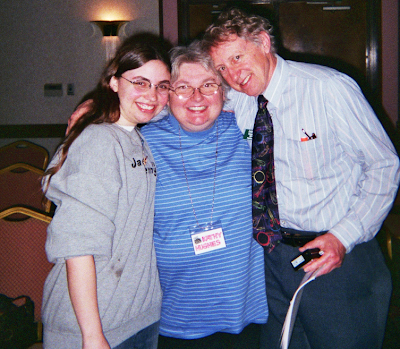 Danny and Kathy Hughes—We’ve adopted the whole Hughes family. Son David refers to them as “the Most Holy Hugheses.” They’re both amazingly friendly and supportive people that we’re proud to call friends. 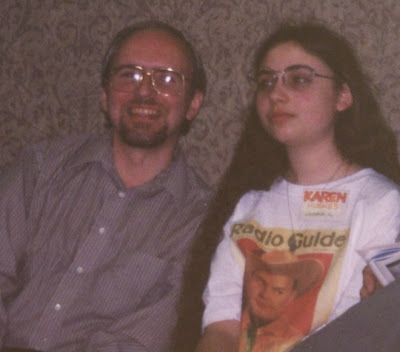 Karen Hughes—What can one say about Karen? Since she was eleven years old she’s been a regular at this convention. The world’s biggest Jack Benny fan, she has at times played onstage my wife, my sister, my mother, my daughter and I have been her father, her husband, her brother and her robot (!). Her positive attitude lights up life when she’s around.

Martin Grams—The prolific author and a regular dealer for a number of years now, I remember the first time I saw him thinking he was far too young to have written that SUSPENSE book I was buying. More recently, he’s actually employed me to work behind the scenes on some of his books and projects. 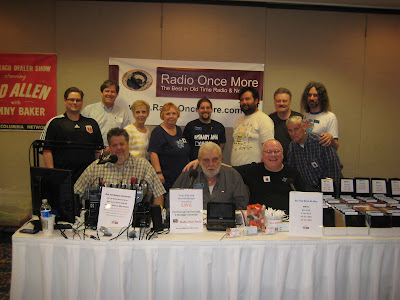 Rodney Bowcock, Roy Bright, Chris Holm, Ken Stockinger, Neal Ellis, etc.—the Radio Once More crowd. Broadcasting live from the Con in recent years, they’ve helped keep the spirit of OTR alive throughout the year via the ‘Net and helped bring many of us even closer together.

I know I’ve forgotten a number of people and sadly there are, even after all these years, some regulars I’m always pleased to see but whose names I’ve never caught! Allow me to thank you all for being such a major part of my life. For more than two decades when I was working, I insisted on getting the convention days off and wouldn’t hear any arguments about it. I never got any.

The Greater Cincinnati Old-Time Radio and Nostalgia Convention, like so many parts of life, becomes a thing of the past this weekend. Friendships made and lost, marriages, births, deaths, illnesses, triumphs and tragedies. We’ve all shared them for all these years. We really won’t know what to do with ourselves next spring.
Posted by Booksteve at 2:00 AM