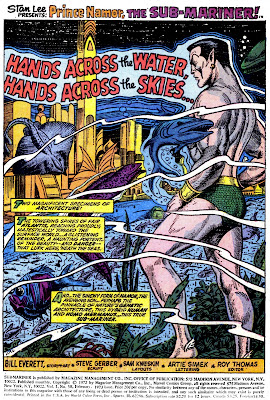 Still recognizably Everett here but noticeably toned down after the previous issue's freneticism. Steve Gerber--an odd choice--was brought in to handle the actual dialogue and Sam Kweskin is credited with layouts--solid, but duller than Bill himself would have done. But then just about anyone's would be.

As far as the splash, Namor looks suitably regal although he appears to be listening to Paul and Linda McCartney's 1971 record, UNCLE ALBERT/ADMIRAL HALSEY, based on the paraphrased lyrics serving as the issue's title. Oddly laid out with our hero serving as part of the frame itself and the three yellow text boxes being highlighted in the layout for no apparent reason. Dated February, 1973, this would have been on the stands in December of '72. Everett wasn't long for this world.

Posted by Booksteve at 4:03 AM