Movies That Fell Through the Cracks # 73 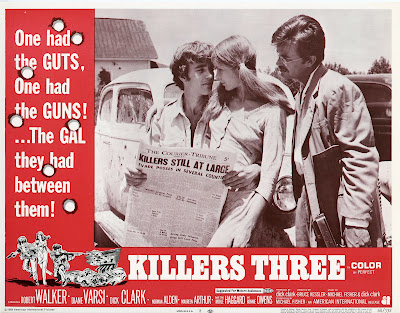 I believe it was the notorious seventies exploitation movie BIG BAD MAMA that I saw on a double bill with today's feature, 1968's KILLERS THREE.

One of the few things touched by the now-late Dick Clark that didn't turn to gold, KILLERS THREE was co-written and produced by the AMERICAN BANDSTAND frontman and pretty much disappeared on release. 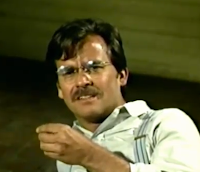 Robert Walker, Jr, (whose "look" was the visual inspiration for Ditko's Peter Parker I've always contended) stars as a young backwoods moonshiner opposite Diane Varsi (formerly an A List player who turned her back on Hollywood and ended up at AIP). Along with their "smart" friend (he has glasses and a mustache, played by Dick Clark, they decide to rob a fellow moonshiner, end up killing a whole big bunch of folks and taking it on the lam from the Sheriff (ironically played by "outlaw" country legend, Merle Haggard!).

Merle Haggard appears on the rich country music soundtrack (with future California Lieutenant Governor Mike Curb listed as one of three credited with original music) but other than that and a rather violent end for Dick Clark in the film, I can't say it made much of an impression on me.

Forget the Payola scandals. After all, Clark was exonerated there. KILLERS THREE was the real skeleton in Dick Clark's show biz closet.

Rest in Peace Dick. We'll forgive this one. 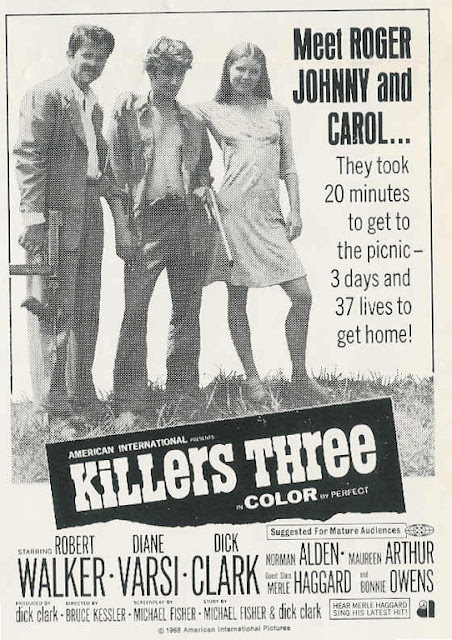