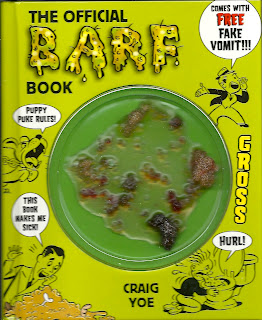 April Fool's day is fast approaching. If you're one of those who purchases gag gifts for April Fool's Day, might I suggest THE OFFICIAL BARF BOOK. Quite frankly, it was all I could do not to gag just going though it...and I WROTE IT!

Well, not exactly. THE OFFICIAL BARF BOOK is Craig Yoe's follow-up to his astonishingly successful OFFICIAL FART BOOK of a couple years back. This time, Craig recruited a bunch of folks to help put together. I'm credited in a dozen chapters. Also involved were my lovely wife Rene, former DC writer/editor Jack C. Harris, illustrators Vince Musacchia and Greg Oakes, fellow I.T.C.H. member David B. and a host of others.

Greg Oakes did the art for my biggest contribution, ROCK AND ROLL HEAVIN', an irreverent section on rock stars who...well...choked to death on vomit.


All in all, THE OFFICIAL BARF BOOK is a surprisingly educational book filled with historical tidbits and trivia, but also with enough gross limericks, cartoons and illustrations to turn even the strongest stomachs. I dare you to try reading it without at least coming close to adding your own chapter. "Urp!"


Did I mention it comes with free plastic thor-up attached to the cover? Talk about a major selling point! Oh and if you think THIS one was bad, wait until you see what next year's follow-up is going to be!