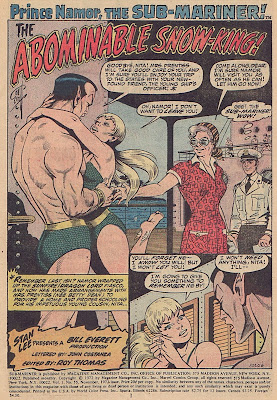 Note that this one says "A Bill Everett Production" rather than credit him with anything specific. It's obvious he does the lion's share of the work again but some of the inking--as well as some pasteovers or retouching--is clearly from someone else. That's Namor's old girlfriend Betty Dean in the glasses, about to take custody of the Prince's jailbait cousin so he can get on with some adventures and stuff.
As splash pages go, this one is largely exposition, quickly finishing off the preceding, problematic storyline in order to introduce a big, kind of silly looking monster. I do like the design of Betty's dress, though, and the muted colors are always welcome. At the point where the fans were reading this and raving about Everett's big comeback, little did we know he had only about six months to live.
Posted by Booksteve at 12:07 AM