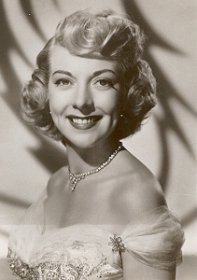 Lots of new things this time around at BOOKSTEVE RARITIES. Here are just a few.

NEW ITEMS AS OF March 1, 2012
BLONDIE: The Television Series
In the 1950s, a short-run television series starred Arthur Lake and Pamela Britton (with Harold Peary as Mr. Dithers), based on the long-running comic strip of the same name. Yes, Lake was reprising his role of Dagwood from the movies. These half-hour TV shows are very enjoyable. This five disc set includes the following: The Pilot Show, Mr. Dithers is Hospitalized, Deception, The Payoff Money, Made to Fire, Alexander's Birthday Party, Dagwood's Ego, The Lamp, Get That Gun, The Spy, Howdy Neighbor!, Mr. Dithers Moves In, Husbands Once Removed, Blondie is the Bread Winner, The Grouch, Puppy Love, The Payoff Money, Rummage Sale, The Tramp, Blondie Redecorates, and The Quiz Show. This is a five-DVD box set!  $25
THE TALL MAN  (Complete Series)
Fictionalized stories about Pat Garrett and Billy the Kid, set in New Mexico in the 1870s. The complete 1960-62 television western, all 75 half-hour episodes, are contained in this eight-DVD box set. Stars Barry Sullivan and Clu Gulager. Guests include Kermit Maynard, Leonard Nimoy, Martin Landau, George Macready, Jim Davis, Andy Clyde, George Kennedy and more!
$40.00 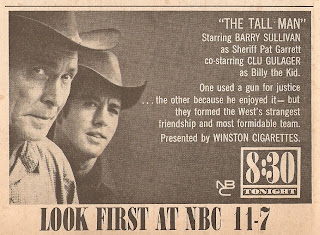 ORCHIDS AND ERMINE  (1921)
Even if you don't care much for silent movies, this is one of the ten must-see films. Known as the film debut of Mickey Rooney (age 3), it's also one of the funniest films ever made. Colleen Moore plays a switchboard operator at a fancy hotel who meets an oil millionaire from Oklahoma but thinks he's just the valet. Comical situations start to happen. Very witty, very funny, and gorgeous picture quality (especially considering the fact we've bought four different releases of this movie till we finally found a gorgeous one).
THE GOOD HUMOR MAN  (1950) 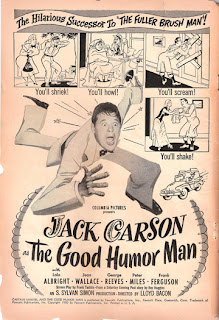 Biff Jones is a driver/salesman for the Good Humor ice-cream company. He hopes to marry his girl, Margie, who works as a secretary for Stuart Nagel, an insurance investigator. Margie won't marry Biff, though, because she is the sole support for her kid brother, Johnny. When gangsters come into the picture, Biff tries to help out --only to be accused of murder. When the police refuse to believe his story, Biff and Johnny set out to prove Biff's innocence and solve the crime. Stars Jack Carson, George Reeves and Lola Albright.
REX BELL WESTERNS
Six classic cowboy Westerns starring Rex Bell. The Tonto Kid (1934), Law and Lead (1936), Saddle Aces (1935), The Idaho Kid (1936), Gunfire (1934) and West of Nevada (1936). This is a two-DVD set.
To order any of these or hundreds more rare items, go here!
Posted by Booksteve at 9:50 PM