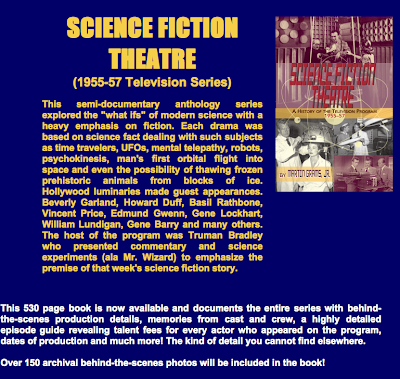 Martin Grams has done it again! His newest book, SCIENCE FICTION THEATRE, is now out. This is NOT a review as I was privileged to do behind the scenes work on this volume. That said, I will tell you that if you're a science-fiction fan or an early TV buff, Martin details the history of this important but often overlooked anthology series from the mid-fifties in the same style that he previously dealt with the later TWILIGHT ZONE, a show that might not have even existed if not for this one.
Starting with a remarkable history of early television syndication. Martin works through full biographies of all of those involved with the series and then a detailed guide to the hard-to-see episodes that runs more than 300 pages! As with all of the author's pop culture books, he's unearthed the rarest photos you could imagine to complete the picture.
When I was a kid in the sixties, SCIENCE FICTION THEATRE was still in reruns on Saturday afternoons. Every episode opens with host Truman Bradley working on an experiment connected somehow with the plot, lending an air of authenticity. The low budget caused the producers (the same folks who would later bring you FLIPPER) to inadvertently give the series a much more realistic look, also, and that made the stories just a little creepier sometimes.
If you're a big fan of this series, I'm sure you'll want this book. The thing is, though, even if you've never heard of SCIENCE FICTION THEATRE, Martin has crafted a fascinating book about the complexities of television in a day when everyone from producers and writers to the stars themselves were making it up as they went along. Everything was new. Everything was frustrating. And in retrospect, everything was a type of fun you just don't see anymore.
Order your copy at this link and BOOKSTEVE'S LIBRARY gets a cut! Thanks.
http://oldtimeradiotapes.homestead.com/fundscifitheatre.html
Posted by Booksteve at 8:38 AM