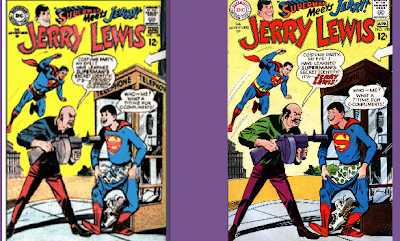 Sometimes you have to wonder what the thinking was behind editorial changes on comic book covers. Here we see the Jerry Lewis/Superman crossover we had the other day on the right with Jerry being confronted by a big mean guy with a mustache and some hair. BUT...on the left we see the cover as originally promoted in DC's own house ads and we see that said "big, mean guy" is actually Lex Luthor! So...an anonymous, nameless bad guy made more sense to someone at DC than their # 1 Superman villain? Go figure.
Posted by Booksteve at 4:14 AM