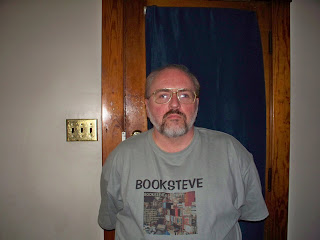 I'll be honest with you, we rarely get out of the house anymore and we haven't been to a comic book convention since the 2009 Mid-Ohio Con. A while back when we had some money, though, I picked us up three tickets to the 2nd Annual Cincinnati Comic Expo. So in spite of various aches and pains--and the fact that the always amazingly crowded Cincinnati Oktoberfest was only a couple of blocks away, we headed out. We found a parking place about four blocks north of the Convention Center that would prevent our having to deal with the street festival (and its closed off streets) in any way.As you can see by this shot taken before we left, I was wearing my new Booksteve shirt (with my GEEK'S JOURNAL 1976 pic on the back!). The minute we walked into the show, Archie writer Craig Boldman yelled out "Booksteve!" and Rene said the shirt had paid for itself then and there. Had a nice talk with Craig about the ARCHIE volume I worked on. 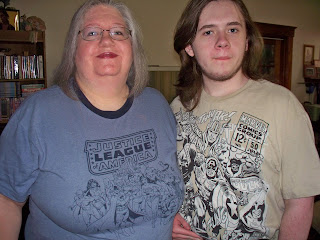 David was wearing a Marvel superheroes shirt and Rene a JLA one (provided by LM. Thanks!) We actually saw another guy with David's shirt and someone else stopped to compliment it, too.
We waved at Paul from Comic Book World as we started wandering around. With our financial situation being what it is, I had no money to spend--probably a first for me at a show like this. I avoided temptation by not looking at the dealers tables very closely. Sorry dealers. I wish but...you know how it is.
At the Vanguard booth, I had something to drop off with J. David Spurlock who generously invited me in back of the table and introduced me to the Guest of Honor, Jim Steranko. I told him I had considered bringing my ragged old copy of his 1970 HISTORY OF COMICS for him to sign. I explained that it was that book that kept me interested in comics at a time when I was starting to grow out of them at age 11. He said, "Ah so you blame me! It's my fault!" He said he wished I'd brought the book as he greatly enjoyed seeing well-loved copies. In 1977 when I met him originally at a Columbus Con, he wouldn't sign my MEDIASCENE on the front cover, opting instead to sign it on a Batman page he had drawn. On Saturday, I watched him generously sign comics he had absolutely nothing to do with to the delight of a couple of wide-eyed little boys. 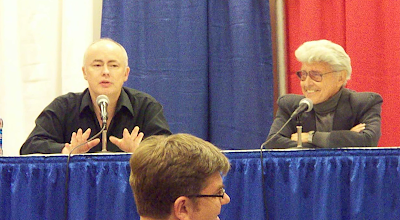 We wandered around some more and then went to see the Steranko panel which son Bookdave said was the highlight for him...and not just because David Spurlock remembered his name from earlier and name-checked him from the dais. That's fellow blogger and Facebook pal Matt Tauber in the front row in the only pic I snapped at the show. I didn't recognize him 'til after the fact and missed meeting him and a couple of other FB friends who were there.
Ran into my old friend Terry whom I had hung around with throughout the seventies. We attended our first comic book cons together. His grown son was also there but was off wandering so I didn't get to meet him. Ran into Sci-fi fan legend Chris Barkley whom I hadn't seen in 20+ years and he actually had a couple of presents he'd brought for me! Said he figured he'd see me there! Thanks, Chris! I love 'em!
Didn't really get to speak with guests Michael Uslan or Jose Delbo but it was fun watching them interact with fans. Mr. Delbo had a huge smile on his face as he, a long-time artist on WONDER WOMAN, posed for pictures with a really good WW cosplayer! He also danced divinely with Stan Goldberg!
Mr. Goldberg's table was always crowded but I did finally get to meet him. I reminded him that I had interviewed him twice last year for the ARCHIE volume. He asked if it had ever come out. We had a very pleasant talk until I realized he was neglecting fans to speak with me so I bid him adieu.
Wanted to see and perhaps even participate in the Trivia Contest but my leg muscles were not holding up well from all the walking so we decided to go. At that point, however, Rene tripped and took a bad fall. The Convention Center staff were all over the situation in seconds and carted her off in a wheelchair to be checked out. Her knee was bruised, swollen and sore but mainly she was embarrassed. We headed straight home and put her to bed with a icepack and she was fine by the next morning.
All in all, except for that last bit, a fun, memorable show that I would highly recommend to all next year!
Posted by Booksteve at 9:08 AM