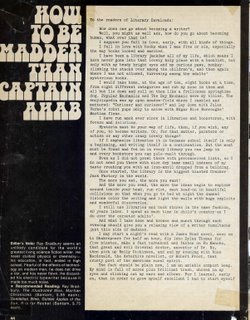 I believe it was 1975 when I saw this article, a two page piece by Ray Bradbury in LITERARY CAVALCADE magazine at my high school. Bradbury was already my favorite writer with a boundless imagination unlike any before or since. I had devoured THE MARTIAN CHRONICLES and S IS FOR SPACE while FAHRENHEIT 451 quickly became my favorite novel. I had even read several of Ray’s nostalgic newspaper articles about Tarzan and the Wizard of Oz and all of the brilliant and terrible things that influenced his work. This piece, though…this two page piece at the back of the magazine, was what cemented in my mind my desire to be a writer. 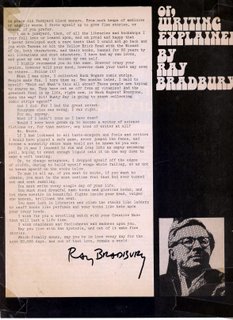 After reading this, I knew that I wanted to be crazy and insightful and humorous and romantic and poetic and think things no one had thought before. This was the moment. This was the muse that made me fan the flames of that desire. Yesterday, as I continued in my job search, I began preparing a writer’s resume and, while I may not have made a living at it (yet) I found that I had written and even published much more than I had realized. Thanks to Ray Bradbury, I really did become a writer. Thanks to Ray Bradbury, I am a writer!
Posted by Booksteve at 9:34 AM