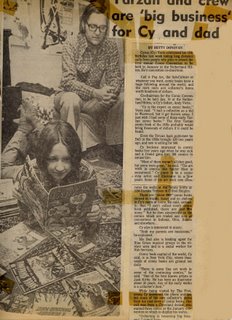 We've all seen these articles about kids collecting comics and HEY! They're worth money! Inevitably the kids say they want to create comics themselves someday. Ever wonder whatever happens to some of these kids? Well, little Cy here in 1975, whose dad operated the second ever comic book store (to the best of my knowledge) in Cincinnati, made good, being the creator of BULLETPROOF MONK --including the movie--amongst other cool things. Check out his IMDB listing at Cyrus Voris for his movie and TV credits. Hey, Cy! Remember me? You and I were among the tiny handful of people who turned out for the US premiere of SPACE 1999 at a Cleveland Convention. I left halfway through to join the huge STAR TREK crowd next door that were clearly having more fun! Congrats on your success!
Posted by Booksteve at 8:57 AM