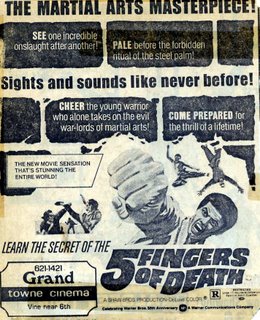 Here is the film that started the whole US martial arts boom in 1973...at least in my part of the country. 5 FINGERS OF DEATH(1972) starred Lo Lieh and had been playing for a week or so when a friend talked me into seeing it at the Grand in downtown Cincinnati. It was a Sunday afternoon and the place was unusually crowded. Even though it was rated R and we were 14 (his mother took us. Sheesh!) it seemed to be mostly kids. The Chinese film was violent, exciting and unlike anything most of us had ever seen before .It left us wanting more. It ran for several weeks and then came news that former TV star Bruce Lee would be opening soon in one of several martial arts oriented films he had been making in recent years in Hong Kong (my friend and I had wondered whatever happened to that guy!).Cool! Bruce would very quickly eclipse Lo Lieh in the brief time he had left before his untimely passing. Lo Lieh (or perhaps more accurately Lieh Lo) went on to appear opposite steely eyed Lee Van Cleef in the amusing martial arts spaghetti western, THE STRANGER AND THE GUNFIGHTER. He made plenty more films before his own 2002 death but none that ever took him to the heights of that first US exposure. A year after 5 FINGERS OF DEATH nearly every urban theater was running martial arts films on a regular basis but apparently, that film's distributors weren't that confidant in their own product. If you notice, the face on the guy in the ad (originally colored red on the poster) is not clearly oriental but, in fact, ambiguous enough to be African-American! Looks like they were trying to convince folks that this was a blaxploitation film instead of a Chines import in order to ensure better box office! Although little seen today, this is NOT a movie that fell through the cracks. In fact, you can order it here: Super Strange Video
Posted by Booksteve at 2:18 PM