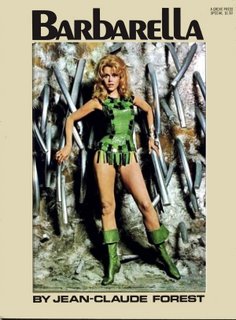 They say you always remember your first. BARBARELLA by Jean-Claude Forest was the very first graphic novel that I ever read…and it was considered pretty graphic for its day. Looking at it from our jaded 21st century view, the nudity found in this 1964 publication is nothing. I mean, England’s World War II newspaper strip JANE was at least this explicit two decades earlier. Add to BARBARELLA, however, its satirical bent, sci-fi/fantasy setting and lovely artwork and you have a huge European success story. In a review quoted on this volume’s back cover, PLAYBOY referred to the strip’s "blend of sensuous science-fiction and witty mythology, luminous hallucination and perverse melodrama" and called BARBARELLA "the very aPOPtheosis of eroticism."
In the US, the BARBARELLA album was translated and reprinted in 1966 by Grove Press, an important name in the annals of publishing as they made their reputation by printing controversial, banned books. Again, just as we look at the Beatles 1964 moptops now and wonder why we ever thought that was long hair, it’s hard to imagine BARBARELLA with its toplessness, its pleasure machine, its post-coital robot sex and its lesbian villain as being all that controversial. Heck, Woody Allen long ago used a variation on the pleasure machine in SLEEPER with the Orgasmatron and if you’ve been following recent press reports, there’s a lesbian fighting crime in Gotham City these days. As far as toplessness, have you looked at cable TV lately? The robot sex...well, okay, I'll grant you that one.
I was 14 years old when I got this graphic novel, obviously a 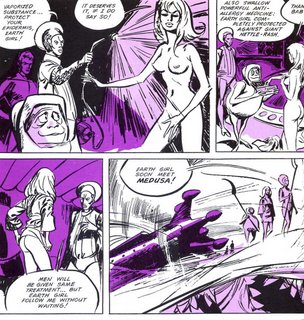 post-movie reprint edition, by mail order in 1973 and I’ll admit to being disappointed that it wasn’t smuttier. That said, I found myself engrossed in its European style. From the unusual artwork (at that age, any non-Kirby inspired artwork seemed unusual to me) and the often odd translation to the single colors that dot each individual chapter, this was unlike anything I’d seen before. Later on, as I read up on comics from France, Belgium and Italy I wanted more but, unfortunately, I didn’t read the languages and the non-superhero subject matters of many of these albums meant that they were unlikely to be translated.
BARBARELLA had, of course, been made into a big-budget major motion picture in 1968. Jane Fonda, still in full Bardot clone mode, starred as the heroine for her then-husband, director Roger Vadim (also Bardot’s ex-husband). When I finally saw it in 1979, I found it to be relatively faithful to the graphic novel with teasing sensuality, pop arty sets and dialogue that sounds like a bad translation. Actually, the film version reminds me more of ALICE IN WONDERLAND with Barbarella as Alice and many of the odd folks she meets being just as crazy as the Mad Hatter. Pre-political Jane looks absolutely perfect as the character and her uninhibited performance is fun but comes across as stilted when you remember that this woman is probably one of the greatest American screen actresses of the twentieth century. Her makeover into the controversial (to put it mildly) "Hanoi Jane" has no doubt hurt the reputation of this and many other of her films just because she’s in them. 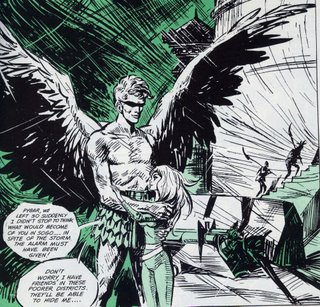 I saw BARBARELLA, the movie, again recently on TV and enjoyed it even more than I had at age 20. It’s artsy French style now evokes a nostalgia in and of itself and even gives the impression of spoofing the styles of other pretentious directors such as Godard. Jane Fonda,

long since remade again and again (although bad feelings linger) is just so young, pretty and open that you just dote on her. Even John Phillip Law’s dull performance as Pygar the blind angel now seems a considered style choice. Still, the movie to me will always be an afterthought to the wonderful experience of discovering the true BARBARELLA, my first graphic novel! What was yours?
Posted by Booksteve at 8:16 AM