The Adventures of Superboy-1961 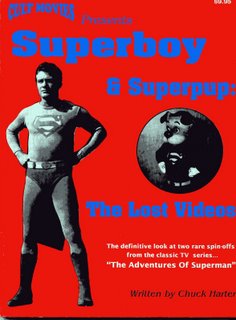 THE ADVENTURES OF SUPERBOY was supposed to be producer Whitney Ellsworth’s solution to how to continue the successful ADVENTURES OF SUPERMAN TV series in spite of its star’s death in 1959. This 1961 pilot starred Johnny Rockwell and was produced and directed by the same folks who did the original series. Missing, of course, were Lois, Jimmy and Perry but in there place you had Lana Lang and Police Chief Parker. A half season’s worth of scripts were commissioned and one was chosen to shoot. Although it never aired, modern viewings reveal it to be well acted and of good quality. 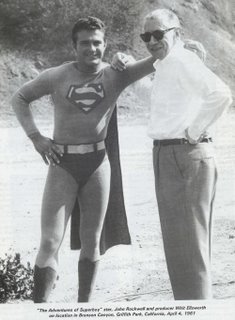 The whole story of the aborted project can be found in the book pictured here (along with the equally bizarre story of SUPERPUP). Although cheaply printed, author Chuck Harter’s book offers tons of screen shots and behind the scenes photos of both projects along with more detail than you might think possible at this late date. Rockwell, an acting student of Agnes Moorehead (and I read somewhere a friend of Hugh Hefner) was 23 years old at the time and gives a suitably boy scoutish performance as both Clark Kent and Superboy. The overall feel of the project is that of Andy Taylor’s Mayberry invaded by gangsters and a superhero. That small town vibe was popular all over the television landscape at that time so what was the problem? Why didn’t we see several full seasons of super heroics from Rockwell, Ellsworth and friends? According to the book, the bottom line seems to be that it was 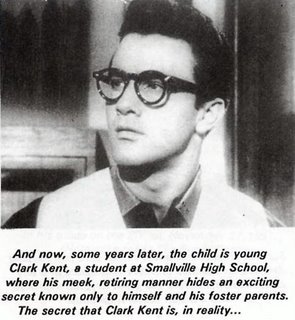 squashed by the sponsers when they reasoned that they could continue to syndicate and profit from the George Reeves originals without having to pay for any new production.
The book presents a summary and detailed information on the making of ADVENTURES OF SUPERBOY pilot and the author even found Rockwell for a great then and now picture. There's even a detailed summary of each of the unproduced scripts for the series! The whole concept was a missed opportunity perhaps but an interesting bit of Super-trivia in the week in which, at long last, SUPERMAN RETURNS. 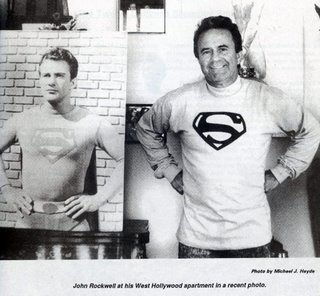 Posted by Booksteve at 7:39 AM