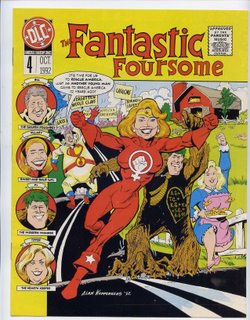 Well, here it is election time again and even though there's no presidential election this time, that's no reason we can't look at this Clinton-era parody comic that came courtesy of the late, somewhat lamented SPY magazine back in 1992. Drawn by Alan Kupperberg, longtime DC, Marvel and NATIONAL LAMPOON artist (who now draws the comic strip, ANNIE) and written by sometime comic writer Larry Doyle, this 8 pager manages to make fun of both sides in a way that barely seems possible in these more polarized times!
The controversial Ms. Tipper Gore appears as THE HEARTH KEEPER and even the Comics Code symbol is parodied as "Approved by the Parents'Music Resource Center," 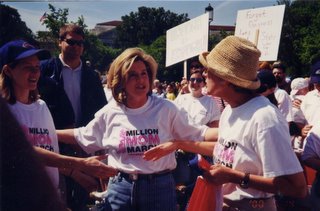 the group founded to save the US from explicit lyrics after Tipper's highly publicized "debates" with Frank Zappa and John Denver.
On a personal note, though, as a lefty from way back, I'd have to say she seemed quite delightful when I met her in 2000 at the Million Mom March. I posed for pictures with her in front of about a hundred wire service cameras and never saw a one but here's one I, myself, took of Tipper introducing her daughter to someone that day.
Posted by Booksteve at 12:07 PM