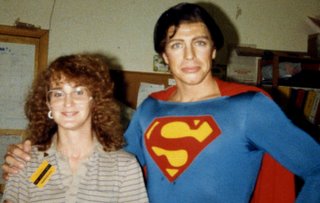 July of 1988 marked Superman's big 50th anniversary celebration and the Mall where I managed a bookstore at that time was in on it. Our annual Summer sidewalk sale had been designated as a Superman Sidewalk Sale. Seeing as how my store was one of only two in the mall (the other being the toy store) to actually sell Superman products, I decided to go all out. I wrote DC about my ideas for decorating and promotions and included a copy of a flyer I had made up and wanted to hand out. 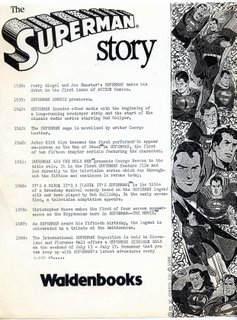 In due course, I received a letter back from DC's Matt Ragone encouraging my efforts but insisting on my putting the requisite little "tm" mark all over my flyer. He also included some buttons and a couple gold plated Superman shield tie clasps. Cool! With the mMall providing balloons and posters (and capes) we were ready to go!
The weekend of the sale, the center court at the Mall hosted a travelling Mall Superman show. The announcer introduced the Man of Steel but no one came out on stage. After another try, we finally heard someone calling, "Lois?" "Uh...excuse me. Lois? LOIS... Hello?" and murmuring to himself. Ultimately, the spotlight focused on a blue-suited man in the crowd with glasses and a hat. Clark Kent. He continued looking for Lois for a few before wandering behind the curtain and emerging, much to the kids' delight, as Superman! 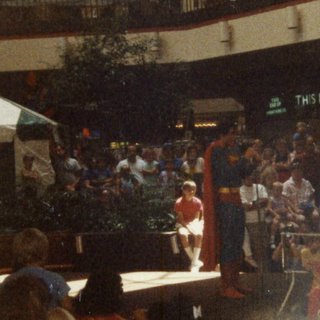 He did four shows that day and after the second I noticed that afterwards when he was called away to stop a falling meteor or something, he ducked through the abandoned storefront next to our bookstore. Thus it was that, after the third show, I was waiting for Superman in the back hallway where I snapped a picture. 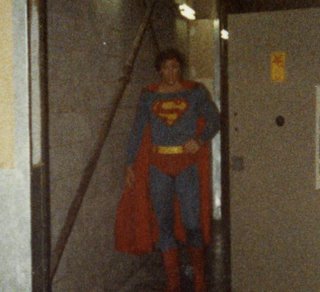 He graciously agreed to step in my store and pose for pictures with my staff. Turns out he was a gawky, Jeff Goldblum-ish New York stage actor with a really bad wig but he made those kids believe that day. In fact, the woman pictured here told me that her kids loved her copy f this shot for years until they finally began to question who the guy really was!
By the way, I know that Jonathan Frakes once appeared as Captain America for Marvel. Did this "Superman" go on to do anything? Anyone out there recognize him?
Posted by Booksteve at 10:03 PM