I haven't seen any work by Keith Pollard in quite some time and a search of the web didn't help me find out where he is these days but at one time Keith was THE mainstay Marvel artist. From the mid-seventies on, Pollard--one of the first creators to break the color barrier at Marvel by the way--drew every major character including stints on FF and 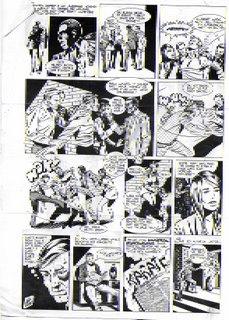 Spidey(during which he's credited with co-creating the Black Cat!). Never flashy, his work was dependable and clean and his storytelling skills grew noticably as time went on.

Here's a little two page piece by Pollard that dates from approximately 1974. Ostensibly an ad for Universal Bodybuilding, there's no real copyright info anywhere here so I can't give specifics. It's my recollection that it was a flyer I picked up at my fifth viewing of ENTER THE DRAGON, Bruce lee's final film. The movie opened in July of 1973 and I remember getting this after it crossed the river from Cincinnati which would probably have been '74 as that film was one of the first to spend months in the same theater (in those pre-multiplex days that could be the kiss of death if you weren't getting ticket sales!). 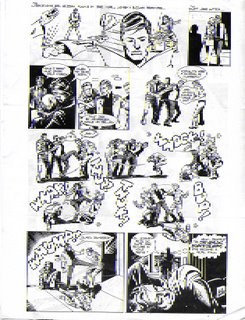 The art has a vague "fanzine" feel to it and the fact that it fails to give even basic information on how to contact the Universal Bodybuilding people is perplexing. There's not even a place for a stamp to go with their address. Still a fascinating and little seen piece by one of Marvel's unsung artists. Keith, buddy, we love ya! Hope you're doing well!
Posted by Booksteve at 7:55 AM