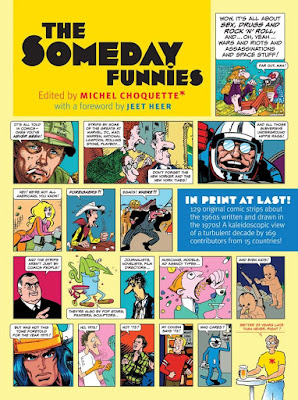 I skipped this book, THE SOMEDAY FUNNIES, when it came out a few years back but only because I couldn't afford its $50 price. Ordered it last week, though, for FOUR BUCKS on Amazon! I assumed it was a used copy but it arrived today and it's a fresh, new, still sealed copy! I can't imagine why this didn't get more coverage when it was first published as it's quite the significant book! The stories were all done in the early 1970s ABOUT the 1960s...sort of. You get a never before published SPIRIT story by Will Eisner, Conan meets Shazam and Sherlock Holmes by Roy Thomas and Barry Windsor-Smith, a new Asterix story by Goscinny and Uderzo, Captain Marvel by Denny, Beck and Don Newton, Barbarella by Forest, and new works by scores and scores of others, both familiar and unfamiliar--Trina, Ralph Reese, Justin Green, Jeffery Catherine Jones, Vaughn Bode, Wallace Wood, Jack Kirby, Russ Heath, Gray Morrow, Guido Crepax, Shary Flenniken, Kim Deitch, Alan Kupperberg, and what may be one of the weirdest combos ever--Stan Goldberg and Dick Giordano illustrating a piece by Doug Kenney. Obviously, I haven't had time to read it yet but just looking through it, I'd have to say the results are mixed at best, but undeniably a major, fascinating project. And yet for some reason, it pretty much died on release. The new book smell alone is worth the four bucks. If you're a serious comics aficionado and think you know all the works by these guys, guess again.
Posted by Booksteve at 12:13 PM 1 comment: 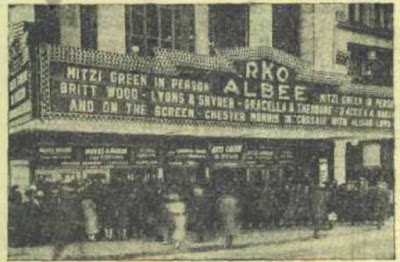 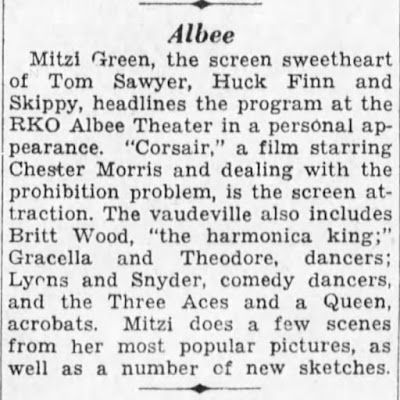 Posted by Booksteve at 11:46 AM No comments: 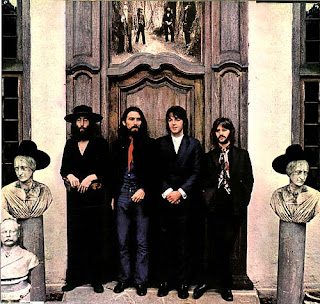 Mark Twain famously said that everything came to Cincinnati ten years after it had already hit everywhere else. Thus, Beatlemania to me was in the 1970s and Disco in the ‘80s. My first Beatle record was their last single, THE LONG AND WINDING ROAD. I had been only five years old when the Fabs first appeared on ED SULLIVAN. We watched THE SCARECROW OF ROMNEY MARSH on WALT DISNEY’S WONDERFUL WORLD OF COLOR that evening. I wasn’t completely oblivious to the Beatles music in the Swingin’ ‘60s, though. I simply never heard much of it then nor ascribed much importance to it when I did.

Here, in what I believe to be the correct order, were my first Beatles songs:

1)   HELP: I remember hearing it for the first time in 1975 on my Uncle Jim’s car radio as we drove to Virginia Beach. I thought it was great and it got me interested enough to watch the movie when it premiered on TV a couple years later.
2)   RUN FOR YOUR LIFE: Never a single but I remember hearing it on the radio in a corner grocery store down the street from where we were living in 1966. I didn’t pay any attention to the creepy words. I just liked the sound.
3)   TICKET TO RIDE: I have always loved a good snow scene and this song is in the snow scene in HELP, which became my favorite scene when I caught it on TV.
4)   WE CAN WORK IT OUT: My mother didn’t listen to Top 40 radio stations but I remember hearing and really liking this one on one of her more conservative stations early one morning before school, probably in ’67 or ’68.
5)   PAPERBACK WRITER: Heard this one on the radio a few times in 1968 and it became a constant earworm, even though I couldn’t understand many of the lyrics.
6)   YELLOW SUBMARINE: Has anyone ever heard this song and NOT liked it. I was a pushover for the marketing blitz when the YS movie came out and it became the first movie I ever saw without my parents, age 9. Went with my pal, Terry, and we had to stand in line that stretched down the block to Woolworth! Convinced my mom to go with me to see it again a week later! Bought the comic book, too!
7)   COME TOGETHER: I didn’t know what it meant (still don’t) but I particularly liked John’s multi-tracked vocal on the title words and I invested a lot of dimes (Three plays for a quarter) in the fall of 1969 playing this on the jukebox at Liberty Chili.
8)   HEY, JUDE: It was early 1970 when I somewhere, somehow discovered this one and it became an absolute favorite. Not long after I bought my first Beatles single in April of 1970, my first Beatles LP was THE BEATLES AGAIN aka HEY JUDE, a then-new collection of singles and B sides that had never been on an album before. 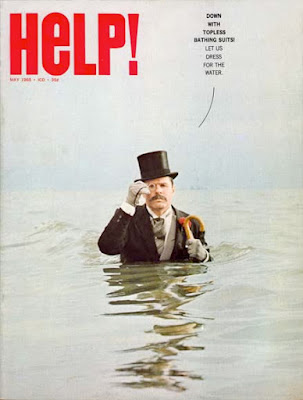 The other day I was digging through a box upstairs and ran across my actual physical copy of the issue of Harvey Kurtzman's HELP! seen here. It was one of the final issues, from when the young cartoonist Terry Gilliam had replaced Gloria Steinem as Assistant Editor. This issue is of particular interest as it contains a photo comic (fumetti) that stars a young British comic actor named John Cleese. Cleese was in the US on tour with other comedians from Cambridge and was asked to appear. Famously, this was when he first met Gilliam, which formed one of the seed that would eventually grow into Monty Python. And so call that Cleese was in the only issue that featured Terry Gilliam himself on the cover! 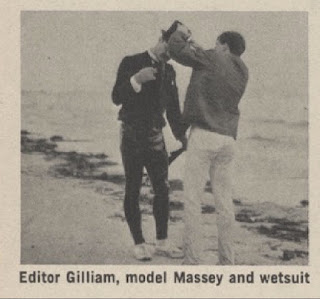 Only that's NOT Terry Gilliam.

I always thought it was Terry Gilliam. Looks like Terry Gilliam. The consensus on the Internet is that it's Terry Gilliam. But it's not. When someone posted a signed (by Terry Gilliam) copy in a Facebook group recently, it was pointed out that many people often mistakenly believe that Terry Gilliam is on the cover but that there's actually a photo inside of Terry with the cover model.

Having just found my own copy, I went and checked. Whaddaya know? There is! But, hey, you can't really see "Terry's" face in the photo and his name is listed first, as though he's on the left, where the cover guy is. Plus isn't the guy in the wet suit much thinner there than on the cover? Could Gilliam have replaced him as the model?

But then I found this post from a while back on Facebook, from the son of model John Massey, Sr. 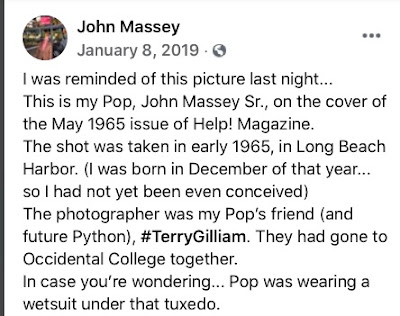 As much as it seems like that should be Terry Gilliam on that cover, that's John Massey, Sr.


Posted by Booksteve at 7:24 PM No comments: