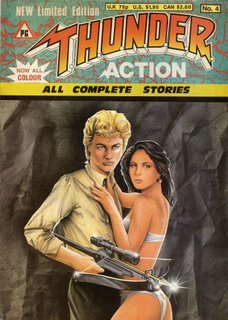 First of all, the THUNDER AGENTS comics of the sixties were and are some of my favorite comics. The scripting may have been lax by comparison to contemporary Marvel and DC books but the art was certainly first rate. "Created" by MAD and EC vet Wallace Wood (there's more to it than that but we don't have time today...), the oversized line featured some of the most original super heroes of them all! I mean, seriously, a 75 year old scientist who creates a method whereby he can shift his brainwaves into any one of multiple blue androids and then dies while in one? Oh, and he has only ONE invisibility cloak that he uses, too. DC wasn't exactly heading to the courts saying NOMAN was a Superman copy!
Anyway, the art for the relatively brief run of Tower, the original publisher, was by (among others)Wood, Ditko, Reed Crandall, Gil Kane, Al Williamson, Dan Adkins, Chic Stone, Mike Sekowsky and Ogden Whitney, all of whom knew a thing or two about excellent storytelling! The heroes became so popular so quickly that they were even parodied in issue two of Marvel's NOT BRAND ECCH in the mid-sixties. 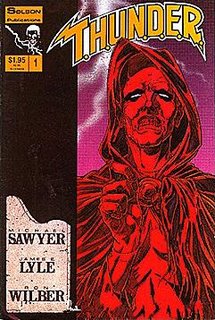 Over the years, there have been ownership disputes and false starts galore including various stillborn revival attempts by Archie, Omni Magazine, Solson (in what is, imho, the single WORST comic book of all time!!!) and a promising but illegal run by one David Singer that featured new work by Dave Cockrum, George Perez and Ditko! John Carbonaro, who legitimately does own the characters was able to stop them but has yet to find a good home for them. Most recently, Carbonaro and DC failed to come to terms with a direction.
Pictured here is a British publication from, I believe (can't find the date)the late eighties. Strangely, the cover feature is "Jonathan Shatter" who appears to have absolutely nothing to do with the THUNDER Agents! It's a fairly typical British spy strip, photo reffed to the extreme, machine lettered and badly written. The only thing that makes this mag--the only issue I can find referenced at all--worth remembering is a 16 page color reprint section featuring classic NOMAN and DYNAMO stories by Wood and Adkins (or Adkins and Wood. Who knows with those two?)Other than a full page Dynamo pin-up, the rest of the pages feature two pages from the original sixties books shrunken to fit. The whole thing is rounded out with a two page, nicely illustrated bio of Wood, a bit spurious in part but still a nice tribute to a great talent!
Finally, and this is what REALLY makes this comic, the indicia points out that "Apart from 'No Man(sic)', all characters and incidents featured are entirely fictional." How's that again???
Here's a link to a pretty cool and apparently "Official" THUNDER site :T.H.U.N.D.E.R. Agents™. 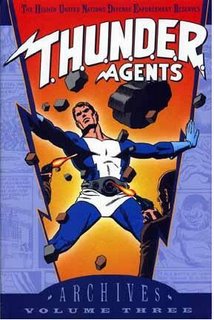