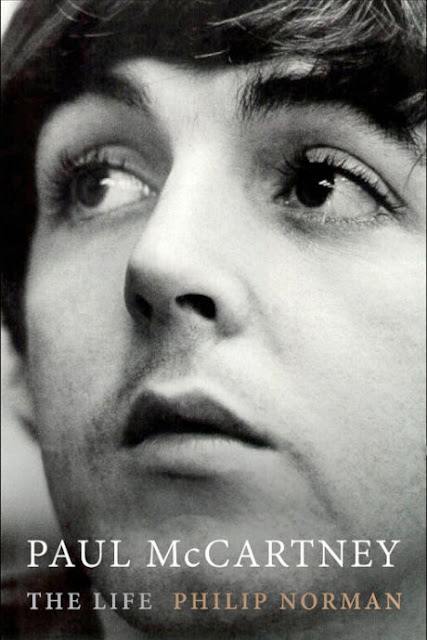 There are a LOT of biographies of Paul McCartney. I picked up my first one through the Scholastic Book Club circa 1973. I picked up my next FOUR in the year or so after that leading up to the Wings Over America tour in 1976. And that's not counting separate books on the Beatles. I long ago stopped trying to buy every book that came along about Paul, especially as each new one claimed to be definitive and "the closest thing to an autobiography we'll ever see."
I made an exception for PAUL McCARTNEY: THE LIFE.

One of my favorite Beatles books has long been 1981's SHOUT by Philip Norman. Many years later, Norman produced a thick, well-received biography of John Lennon entitled JOHN LENNON: A LIFE.

I'm torn on this book. On the one hand, it's immensely readable and is said to have been completed with the approval--if not participation--of Macca himself. It's also more than a little gossipy, even as it does, in fact, offer up information with which I was not previously familiar throughout.

That said, Norman has a bizarre habit of misquoting famous Beatle quotes. And I'm talking quotes that exist on audio and/or video. If I myself know the correct quote, why wouldn't a recognized Beatle scholar like Philip Norman?

And even worse are the distracting typos throughout. I don't believe I've ever read a book from a major publisher (Little Brown in this case) this riddled with typos. Am I just noticing it more now that I work as a proofreader myself?

And finally, there's the odd--to me anyway--affectation of doing inverse quotation marks throughout. Is this a thing I've somehow never run across or noticed with more than a thousand books here at Booksteve's Library? Every quote is within SINGLE quotation marks and a quote within a quote is in DOUBLE quotation marks! The opposite of what I've known my entire life. And worse! I spotted on instance where there is NO opening quote mark at all! Just an ending one (and no, it was not continuing from the previous paragraph).

As you can see, it's all more than a bit distracting. That said, as I noted, I really did learn new things about a man whose public life I have more than a passing familiarity with and whose private life has at times been fairly open as well. Norman offers up a pretty well-rounded portrait of an amazingly talented, multi-faceted man from his childhood to the present day.

Not definitive but on balance, even with the distractions, I'd have to say Booksteve Recommends!

Posted by Booksteve at 6:32 PM