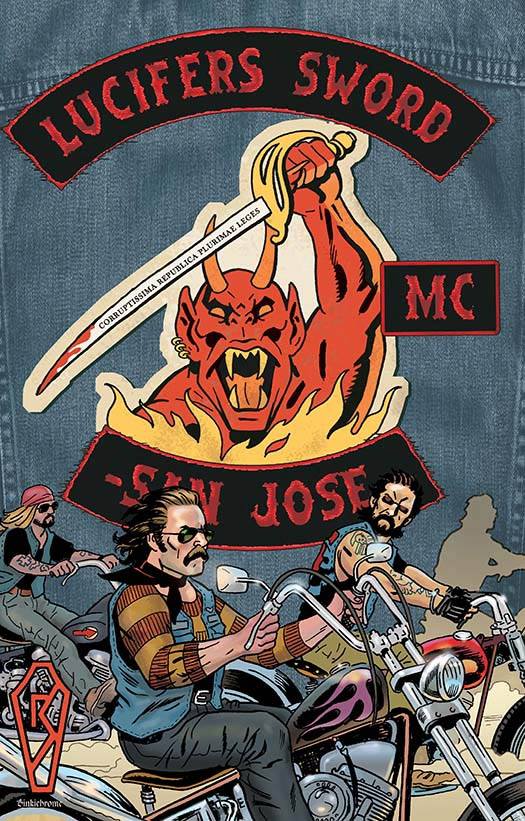 Artist Ronn Sutton, longtime FB friend and a great contributor to both my Wally Wood blog and my Gray Morrow blog, has a new project of his own out! Here's  the press release:

Lucifers Sword MC is a gritty, fictionalized, insider look at life as a 1960s U.S. biker club member. Written by Hells Angel member Phil Cross and illustrated by former Elvira: Mistress of the Dark andStarbikers comic book artist Ronn Sutton, the graphic novel takes readers on a wild ride from the late 1940s through to the 1970s.

The characters in Lucifers Sword MC are fictionalized, but based on the real bikers - including Cross, who appears as the club's prospect, Frenchie. As fans of the TV show Sons of Anarchy know, a prospect is a rookie member. Readers experience rough-and-tumble club life first-hand through Frenchie's eyes.

Artist Ronn Sutton did an enormous amount of research before taking pencil to paper. He watched Sons of Anarchy as well as classic movies such as The Wild One, Easy Rider and Angels Die Hard. He also read magazines like In The Wind and books like From Gypsy Joker To A Hells Angel (Cross' autobiography) and Hells Angels: The Strange and Terrible Saga of the Outlaw Motorcycle Gangsby Hunter S. Thompson.

After the research, the real work began. "This is the biggest project I've worked on in my 40-plus year career as a comics artist" Sutton says. "For five months I drew 15 hours per day, 7 days a week, trying to do my best work ever." 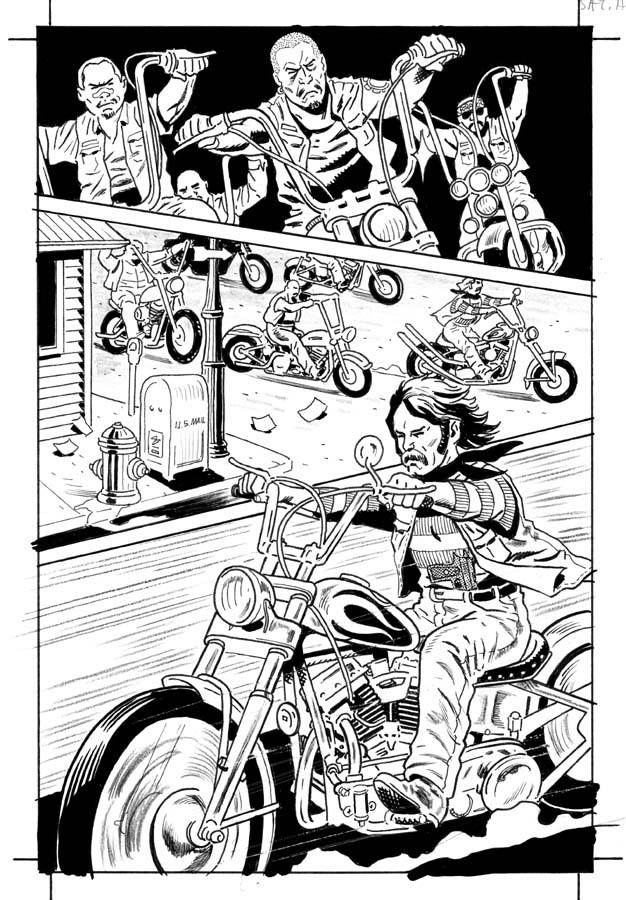 Sutton illustrated Lucifers Sword MC in the traditional comic book method, drawing in pencil first and then inking with black India ink. The graphic novel has a full colour cover and black-and-white interior. Sutton made dramatic use of black and white so action jumps off the page.

Motorbooks' Lucifers Sword MC: Life and Death in an Outlaw Motorcycle Club has world-wide distribution and is available in bookstores, comic book shops and via Amazon online.

ABOUT THE AUTHOR: Phil Cross has been an active member of the Hells Angels Motorcycle Club for over 43 years. His autobiography From Gypsy Joker to a Hells Angel (2013) is also available from Motorbooks. This is Cross; first graphic novel, co-authored and edited by long-time motorcycle enthusiast Darwin Holmstrom.

ABOUT THE ARTIST: Ronn Sutton (www.ronnsutton.com) is based in Ottawa, Canada. He has been drawing comic books for decades, including a nine-year run illustrating Elvira: Mistress of the Dark. The over 200 comic stories Ronn has drawn include Fear Agent, The Man From U.N.C.L.E., Honey West, The Phantom, his creator-owned Starbikers as wel as horror, humor, adventure, historical and romance comics.