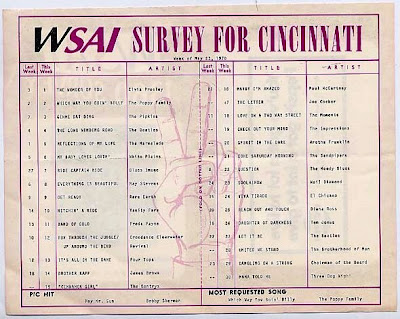 I first discovered Top 40 radio in early 1970 when I was 11 years old. I had just gotten my first record player that could play LPs the year before but only had a few non-children's records. But somehow or other, I came to the realization that the Patti Page, Perry Como and Dean Martin stations my mother listened to all the time on our AM radio weren't the only stations out there...and then somebody got me my own transistor radio!

MY station was Cincinnati's WSAI, 1360, with Jim Scott, Jack Clark, Bud Stagg and others I'v long forgotten. I saw this survey posted elsewhere online and this particular week happens to be very important to me. I had seen the movie LET IT BE at Covington's Madison Theatre a week earlier when it first opened. My favorite song had been "The Long and Winding Road." It became the second single release from the film this week, hitting the charts at # 4. That week, it also became the first Beatles record I ever bought...and the last one they put out before the breakup which occurred shortly thereafter.

I bought a lot of records after that. Here's a look at my memories of this particular week's hits.