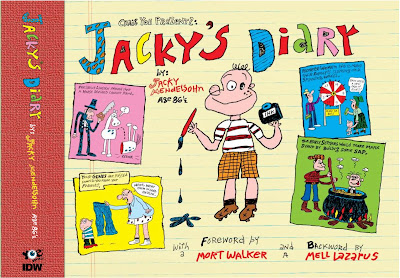 Coming soon from Yoe Books and IDW is a complete collection of JACKY'S DIARY, the wonderfully unique and hilarious three year Sunday strip from the late fifties/early sixties by the great humorist, Jack Mendelsohn!

Although hardly a household name, Mendelsohn--still with us at 86!--co-created several great comic book series with Howie Post. He also wrote many stories for EC's PANIC and many more for MAD.

After that, Jack moved into television where he worked on, among others, THE BEATLES cartoon series which led to his being the major writer on YELLOW SUBMARINE!

Check out Jack Mendelsohn's other cartoon and live-action credits here:

Check out his many comic book credits here:

But most of all, be sure to check out JACKY'S DIARY by Jack Mendelsohn (age 86 1/2)!
Coming soon!