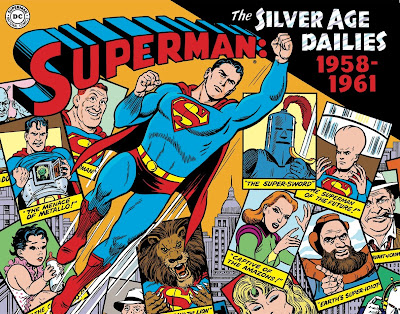 If, like me, you miss Superman, that costumed boy scout hero that used to fly around the skies of the pre-New 52 Metropolis saving people and doing good deeds, then here's your fix!

A couple of decades back, Denis Kitchen put out some marvelous volumes reprinting the Golden Age SUPERMAN newspaper strip. This time out, however, the goal is to reprint ALL the Man of Tomorrow's daily and Sunday adventures, not just the early ones.

Smartly in my opinion, the chosen start point this time is with the Silver Age, to be exact, 1958-1961, just before, during and after when I was born. Some of this stuff has been floating around online for a few years but here we have a big, beautiful hardback collection with notes, annotations and background history.

The main attraction here is that the character's creator, Jerry Siegel, was--temporarily it turned out--back in the fold and I believe every one of the stories in this particular volume is by Jerry, adapting previously published comic book tales by himself and other writers.

And, by "adapting," I mean, he went to town with some of these. For example, "The Ugly Superman." In the comics, it was a rather insulting throwaway short story in an issue of LOIS LANE, illustrated by Kurt Shaffenberger. Here Jerry opens it up and gives it as much depth as possible, stretching it out to utilize the daily format better. Add to that the more realistic art of Curt Swan at an early peak.

Swan's artwork throughout is a major highlight, even as we delve into some of the more implausible situations for which the Silver Age was famous. Wayne Boring, whose artwork graced the SUPERMAN strip almost from the beginning, also does a few stories in this time period. Although past his prime, just seeing his stylized cities and Supes walking through the air adds a nostalgic feel.

All in all, this first of many promised volumes can be silly at times but there's no denying the outright excitement brought to the mix by Siegel and Swan. And one thing Boring never was…was boring! I picked up this volume as part of a sale/trade. Hoping I'll be able to afford future volumes in the series as it's the most fun I've had reading anything connected with DC superheroes in ages!