Better Things: The Life and Choices of Jeffrey Catherine Jones 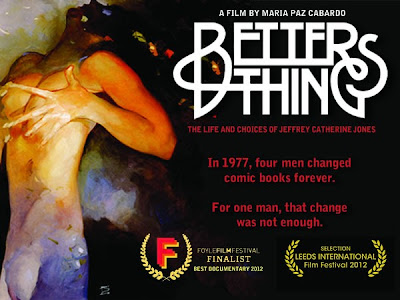 I finally today was able to see the long-awaited documentary on the late artist and friend of this blog, Jeffrey Catherine Jones.

I first discovered Jeff Jones through his unique WONDER WOMAN covers in 1972 and suddenly I noticed his J signature on art from various old and new horror mags, fanzines and paperback covers. It was in 1977, in Philadelphia, where I really became a big fan after I wandered into a room full of Jones paintings at that year's Seuling Con. I've often wondered if Jeff himself was in that room, unrecognized by 18 year old me. 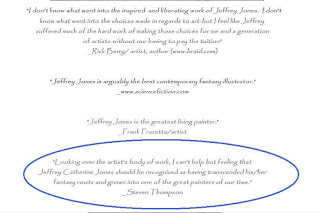 Cut to many years later when I started blogging and suddenly received an email from Jones about something I had posted on my blog about him.  Only by that point HE was Jeffrey CATHERINE Jones! We exchanged a few emails and I discovered she was recovering from a breakdown. She asked if she could quote me on her website and I, of course, agreed. As long as the site was active, my quote was right there after Frank Frazetta's quote on Jones! A proud moment for me.

I forget what brought it up but I remember suggesting that she go on Facebook to find out just how much her art was appreciated. She said I wasn't the first to make that suggestion. A little while later, she did just that and eventually maxed out her friend list at 5000!

I introduced her to my young friend Leslie's artwork and had to explain to Leslie how significant it was when Catherine clicked "Like" on one of her albums!
I think the fan support was good for her. She posted lots of her older pieces and received much love and adulation for them. Eventually, she even did a new piece or two despite having given up art a few years earlier.

From time to time, I'd still get messages from her such as when I switched from PC to Mac and raved about my new IMac online. She said she was considering getting one. At one point in BETTER THINGS, Catherine is interviewed sitting in front of a duplicate of my IMac.
Jeffrey Catherine Jones was still alive when the majority of Maria Paz Cabardo's documentary, BETTER THINGS: THE LIFE AND CHOICES OF JEFFREY CATHERINE JONES, was lensed. She contributes much as she looks back over her life. The film is revealing in many ways, sad and yet uplifting.

Featured in the film is a Who's Who of friends and artists influenced by Jones including Kaluta, Wrightson, Neil Gaiman, Paul Pope, George Pratt, Roger Dean, Louise Simonson and many others. While there are a few rather obvious omissions--only one of which is explained--what's there is certainly open and telling.

The editing is at times choppy such as fading up into a scene with the music already going as though we missed a bit or flashing identifying captions over photos so briefly that freeze framing helps. The content itself more than makes up for that minor flaw and an unexpected positive is the gorgeous cinematography on some of the sections shot especially for this film.

There is a long section on the now long gone underground artist Vaughn Bode as well, almost too long for a film not about him and yet so important in its influence on Jones' life in many ways with which I was previously unfamiliar.

This was  a film I helped fund in a small way and helped promote and yet was beginning to think I would never get to see. Today we had a little bit of money and it is now available to purchase for download ($19.95) so I saw it and you can see it, too!
Go to
http://alivemindcinema.com/betterthings/