Booksteve Reviews: Beatles With an "a" by Mauri Kunnas 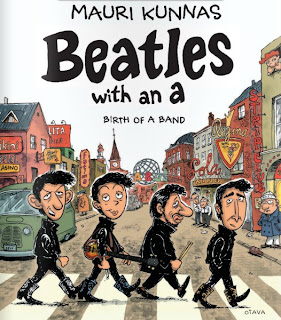 As a longtime booklover and bookseller, I'm sorry to say I wasn't familiar with the work of author/artist Mauri Kunnas. A quick search of the 'Net, however, shows me that he has been, for decades, the most popular children's book author in Finland as well as a renowned cartoonist.

He is also a major Beatles fan.

Yesterday, I received a package in the mail from Finland. It was a solid little box with cartoon versions of the Fabs marching across it toward its customs stickers. Another image was on the back. Inside, a lovely musical  themed gift-wrapping covered the 78 page hardcover, full-color graphic novel, "Beatles with an a."

I had things to do yesterday and figured I'd try and get to the book today. But it stormed last evening so I couldn't do what I needed to do. Instead, I read. I read and read and enjoyed every minute of it!

Not intended to be a straight-forward biography along the lines of Vivak Tawary's upcoming graphic novel take on the same material through the eyes of Brian Epstein, Kunnas's work is more a combination of early seventies undergrounds and early fifties MAD. It's not incredibly dirty but it does have its uncensored moments and the often busy panels deserve more than a cursory glance so one can absorb all the detail.

The story covers the same ground as the movies BIRTH OF THE BEATLES and BACKBEAT, only with more depth. It looks at the Beatles from their births (literally) to the 1962 Cuban Missile Crisis. Whether or not a second volume is planned, I do not know but in a way I hope not. This story stands on its own as it plays out the rough lives and hard times of some unlikely friends as they grow up and strive for a musical dream that forever seems hopelessly out of reach.

From my own familiarity with the subject, it becomes obvious quickly that Kunnas has his own expertise on the subject so the few apparent mistakes he makes are a bit jarring. But then, the translated intro seems to make reference to the fact that he knows they're there. 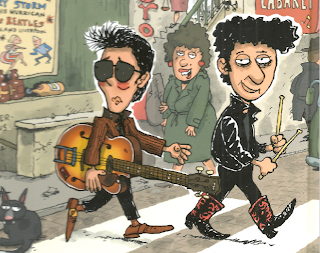 Most of the characters in the oft-told story are given more depth than usual here with John's Aunt Mimi coming across as the major bitch she seems to have actually been rather than his beloved, loving savior as she was originally portrayed!

All of the characters are caricatured with no one escaping. John probably looks best but poor Cynthia is not treated kindly at all! Paul's face is like a little china doll with eyelashes some girl would undoubtedly die to have. George looks the least recognizable and Ringo…well…

The actual history is told and a great deal of emotion comes through but its all tempered by the gritty silliness of the art and the telling, not the least of which is incongruously having Mick and Keef appear as aged cherubs commenting musically from time to time in Greek Chorus fashion…with Stones lyrics.

In the end, this book is a work of triumph--both for the characters and the author! Casual Beatles fans ail enjoy it on a basic level and likely learn a lot. More seasoned Beatle buffs will delight, as I did, in all the amazing minutiae, tidbits and references.

If you're a Beatles fan, an underground fan or just a fan of a good, entertaining graphic novel, you can check out some sample pages and then pick up an English language copy at:

BOOKSTEVE RECOMMENDS!
Posted by Booksteve at 11:34 AM