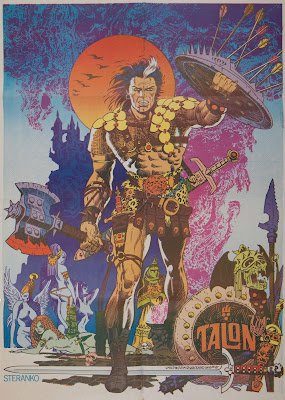 This poster adorned my walls for many a year in the seventies and is probably still folded up in a box somewhere. Steranko's  TALON was supposed to be the ultimate Conan-type warrior. I impatiently awaited his adventures while staring for hours at this colorful image. Every now and then a few new images would arise in fanzines of in Jim's own newspaper or even as a paperback cover for non-Talon stories! But in the long run, Talon was apparently left in the same bin along with the remaining volumes of THE STERANKO HISTORY OF COMICS. The bin marked "Maybe...someday."
Posted by Booksteve at 1:22 AM