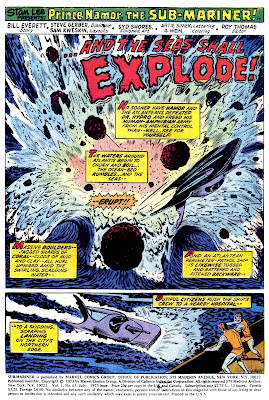 A nice big explosion yet somehow still pretty dull. Once again there's way too much exposition here and the boxes are oddly placed in the very center of the art. Note the lack of Namor himself, never a good idea. Bill Everett's name is up there, apparently his story playing out. But Gerber's (over) writing it and Sam Kweskin's still on the layouts. Syd Shores, another Golden Age veteran (albeit a much better one), is on the inks. The whole thing leads to pretty much of a mishmash of an issue following this lackluster splash. 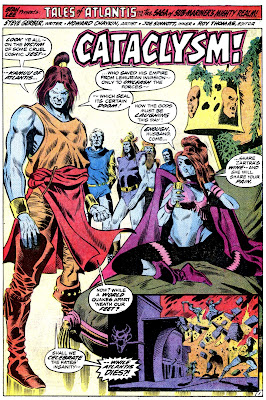 Interestingly enough, this issue has another splash what with a new backup feature entitled TALES OF ATLANTIS. The art on this Gerber story is by a young Howard Chaykin and while it's a bit more intriguing than the main story's, I really don't know these folks and the splash doesn't convince me that I want to either.