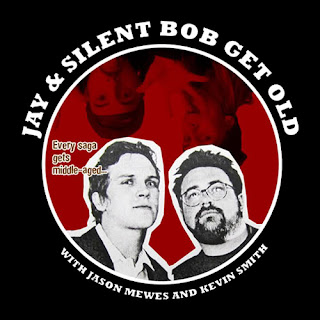 I don’t get out much any more. Between my perpetual lack of funds and the fact that I wouldn’t pay the kind of money needed to see most things these days even if I had it, I just don’t.

But when an old, old friend called me up and invited me to a taping of Kevin Smith’s podcast, JAY & SILENT BOB GET OLD—his treat—I took him up on it.

Kevin Smith first popped up on my radar when CHASING AMY arrived on cable circa 1998. Being the geek I am, I relished it as a true product of geekdom. One of my favorite parts—or two I suppose--was Jay and Silent Bob, two characters played respectively by Jason Mewes and Smith himself. They were shady characters whom I would learn soon enough served almost as Smith’s Hitchcockian cameo in most of his films, street-corner drug dealers with hearts of gold. Bob didn’t speak…much. Jay, on the other hand, let loose with a brain-dead streak of creative profanity and scatological idioms.

They became so popular that they were given major roles in what must pass for Smith’s cinematic masterpiece so far, DOGMA. An attempt at a starring vehicle in JAY & SILENT BOB STRIKE BACK wasn’t nearly as successful but certainly had some fun moments.

Which brings us to JAY AND SILENT BOB GET OLD, a weekly podcast devised by Smith as a way of keeping his best friend alive by keeping him out there both enjoying the adulation of fans and talking about his issues very publicly. As he puts it, the whole show is a creative form of an intervention.

As such, kudos to both men. As a show, however, JAY & SILENT BOB GET OLD leaves much to be desired. 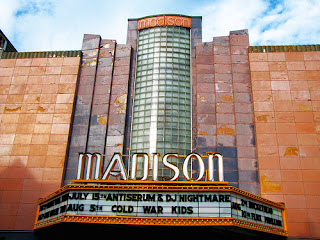 We saw it at the Madison Theater here in Covington, Kentucky. As kids, my friend and I had seen YELLOW SUBMARINE, 2001: A SPACE ODYSSEY and BENEATH THE PLANET OF THE APES at the same theater. We also spent many a kiddie matinee there with hundreds of screaming kids shooting spitballs at the screen through straws. We even saw THE POPEYE SHOW, a stage show featuring costumed actors as Popeye, Frankenstein’s Monster, Ultraman and Heckle and Jeckle.

Oddly enough, the theater, which had stopped showing movies in the mid-eighties and sat idle for many years, hadn’t changed all that much.  It reopened for small-scale rock concerts and dancing a few years back now but I hadn’t been there since REVENGE OF THE CHEERLEADERS more than thirty years ago.

One of the problems with the fact that it hadn’t changed much was that there were few good seats. Unlike most theaters that have a steep slant so the folks in back can see better, the Madison never did and still doesn’t.

One of the ways it HAS changed is that the whole front section is now a bar. The lines were literally curled down the block and around the corner when I arrived but the doors opened and 8 and all were quickly admitted. The show, however, started nearly 25 minutes past its announced 9 PM starting time and, in the meantime, the bulk of the audience had gotten themselves pretty well soused. 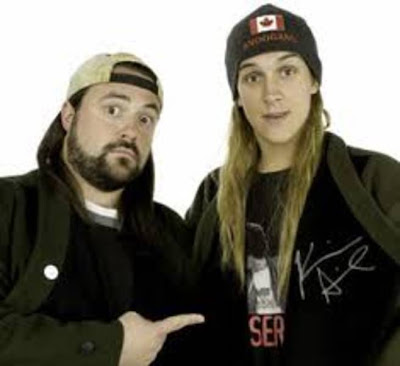 Finally, out come Smith and Mewes to cheers and hoots and a standing ovation befitting the sort of rock stars they are. The sound system was quite good but I still had trouble hearing much of the show thanks to a drunken lady in our row who randomly yelled out and chortled an ear-numbing chortle whenever someone on stage said a dirty word.

And there were lots of dirty words. Some of you may recall my stance on being dirty for laughs: I don’t care how dirty, gross or inappropriate it is, as long as it’s funny. Much of Jason Mewes’ dirty talk was just that—dirty, but unfunny. Oh, he hit a few moments here and there as when describing trying to feed deer he had seen the night before when he and Smith were staying in Columbus, Ohio.

Smith, on the other hand, uses profanity creatively both in conversation as well as in his humor. He was quick to point out that those unfamiliar with the show who expected to actually see the pair in character were undoubtedly confused as to why the fat guy was doing so much of the talking.

He told a mostly hilarious story of where they had stayed the night before—at a house used by the local Swingers Club in Columbus. He read tweets from folks in the audience that he had received prior to the show and even invited one very excited man up on stage to see where he had gotten an inspirational quote from Smith’s most recent book tattooed on his arm.

Kevin pointed out the irony in performing his intervention before drunken crowds like ours and we celebrated 2 years and 51 days of Jay’s sobriety. Smith also wrote an impromptu song for the wife of someone who had tweeted him about his own sobriety issues. The audience all sang along…loudly, drunkenly and off-key but it’s the thought that counts.

Mewes was given the floor for a cautionary tale from his drug abuse days, a scary/creepy story which had, for him at the time, become his norm. 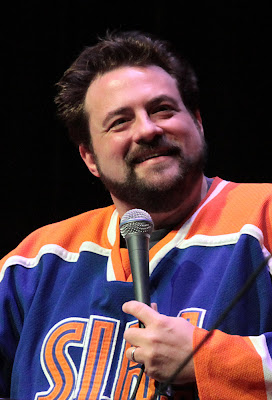 After that, the show wound up with its infamous segment where three volunteers are chosen from the audience to improvise Kevin’s simulated sex acts with a local slant onstage with Mewes. It was dumb, pure and simple, but a crowd-pleaser nonetheless.

Was it a good show? Yes and no. I don’t have to be stoned in order to enjoy Gilbert Shelton’s FREAK BROTHERS or even Smith’s movies…but I think the alcohol definitely enhanced this show for those who indulged.

Kevin Smith has proven himself to be a clever and funny raconteur on stage, on film and in his various podcasts. He can talk endlessly and creatively about just about anything and even his serious discussions can be funny. This wasn’t his best night. Jason Mewes, God love him, is a good guy who tries hard. I hope for his sake and Kevin’s that he makes it. He and Smith make a good team…with a script where he’s using Kevin’s words.

I have to give thumbs down to the good old Madison, though, at least for this type of show. It was nice seeing the place again for a few moments but I can’t foresee any situation that could lure me back. As I said, I don't get out much anymore. When I did get out on a more regular basis, being in an altered stage of consciousness wasn't an actual requirement for enjoying a show.

The episode of JAY & SILENT BOB GET OLD they recorded last night should be on in a couple of weeks at:   http://smodcast.com/channels/jay-silent-bob-get-old/.
Posted by Booksteve at 9:03 AM