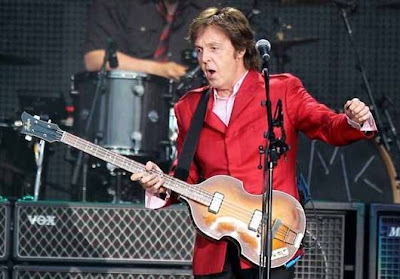 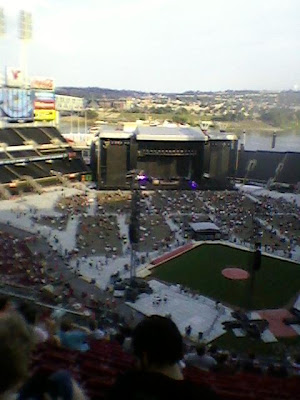 Well, last night was Paul McCartney's final scheduled concert of 2011. I had seen Paul, my favorite singer for 40 years now, 3 times previously. This time, however, was not only the first time my 14 year old son had seen the Beatle but also his first concert ever! So I asked him for HIS opinions:

Hello, this is Department Bookdave, son of Booksteve, and this is a special Guest Review.

I have recently had the good fortune to see Paul McCartney live at the Great American Ballpark. I’ve never been to a rock concert before, and I thought that this would be a good beginning. I was, of course, familiar with Paul McCartney’s music already, having been raised on the Beatles and Wings. However, I will admit that I had suspicions that Paul was getting old and having to be a figurehead while the other musicians actually carried the music. What I saw next destroyed those suspicions.

The one flaw in the concert was an early one. There was a slightly longer-than-expected wait until Paul arrived. During the wait, we were all treated to the sound of assorted Beatles songs, but all changed in some way. To prevent the wait from stealing Paul’s thunder (or, as my father theorized, to make us anxious for the real music), every song was a cover or a remix. As that began to peter out, the gigantic screens to the sides of the stage began to show a scrolling view over a CGI pile of Beatles, Wings, and McCartney memorabilia.

I will admit that the scrolling screens began to bore me after several minutes, but the payoff for the wait made it all worthwhile. The screens began to segue into a minor lightshow as Paul finally came out, clad in a red jacket and dress shirt, holding his signature Hoffner “violin bass.” He and the rest of the band immediately went into “Hello Goodbye,” raising the crowd into a cheer.

The rest of the show was a collection of crowd-pleasers. The songs included Beatles favorites like “Lady Madonna” and “Paperback Writer,” Wings numbers such as “Band on the Run” and “Jet,” and even tributes to the two late Beatles, John and George. Not a single one of these was carried by the band. They were all sung with strength and energy, with the band merely helping Paul as he rocked just as well as he did in his youth. Mr. McCartney was not an old man desperately trying to look like he was still relevant. He had the energy of his youth, and was able to hop around the stage playing multiple instruments over the course of the concert. Admittedly, he was sweating beads by the second song, but he didn’t show any other signs of fatigue.

Songs were occasionally broken up by Paul sharing relevant anecdotes, such as how he always wanted to perform in Moscow simply so he could play “Back in the USSR,” and how Jimi Hendrix once called out to Eric Clapton during a concert simply because he needed someone who could tune a guitar. These could have come across as pathetic attempts at seeming endearing, but they didn’t. They truly came across as this nice guy telling you this funny story about his old friends and the song he’s about to sing.

The one thing that surprised me was how many great moments in the show were provided not by Paul, but by the other musicians. While Paul could have easily carried the show by himself, some of the best moments were done by the four other musicians on stage. For instance, drummer Abe Laboriel Jr. had a showstopping bit in one song where, during a guitar solo, he began to dance. Without leaving his drum set, he did several over-the-top moves including the Macarena. The screens on the sides, which showed live footage of the stage for people in the back rows, began to focus on the dance specifically. When the song finished, Paul joked about how dancing like Abe Laboriel Jr. would make you popular at parties---supposedly. While this was the most noticeable time when the non-Paul musicians played to the crowd, it wasn’t the only one. Guitarists Rusty Anderson and Brian Ray both danced a little around the stage, and keyboardist/musical director Paul “Wix” Wickens once winked at the camera when he realized it was aimed at him.

The eventual finale of the concert was one of the best moments. The song was “Live and Let Die.” Since the song alternates between calming and hard-hitting, the song began with a lot of green lights and images of a pleasant meadow shown on a screen behind the performers. Then, when the song switched to hard rock, the entire stage simply went berserk. The lights turned blood-red, plumes of fire erupted from the front of the stage, and fireworks began shooting into the air as the performers played frantically. Eventually, the lights went blue during a slow part as Rusty Anderson collapsed in over-dramatic mock-death. In any other concert, this would be the finale. However, Paul had one more trick up his sleeve. After Rusty came back from the dead and finished the song, Paul played “Hey Jude,” getting the entire stadium singing in several-thousand-part harmony. No matter how great the fireworks were, nothing could compare to an entire stadium singing together. Of course, this was followed by six encores, but I still count it as the finale.

Overall, this was a truly magnificent concert. Paul showed that he was still a strong musician with his numerous solo bits and constant endurance, but also showed that he was a great person with his assorted anecdotes and general niceness. One man yelled “I love you, Paul McCartney!” and was met with “I love you too, random citizen!” Another man successfully got Paul to sign his wife after his signs asking for it were pointed out as an example of signs that make it hard to remember chords and lyrics. Paul’s backup band all had their own moments that showed that they were extremely skilled by non-Beatle standards, and the special effects all enhanced the atmosphere of each song. To summarize, this was a fun, well-done concert that showcased a living legend of our time who does not, in fact, show a single sign of slowing down.

Posted by Booksteve at 3:00 PM