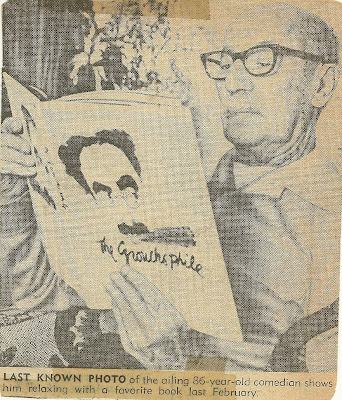 Not sure if this was really the final photo take of the one, the only Groucho but this newspaper clipping originally published just before his death on this date in 1977 thought so. Groucho is reading his "own" book, THE GROUCHOPHILE, a marvelous book that I suspect was tinkered over quite a bit by other hands as it reads as though written by a much more "aware" individual than Mr. Marx was known to have been in his final years.
Posted by Booksteve at 5:58 PM