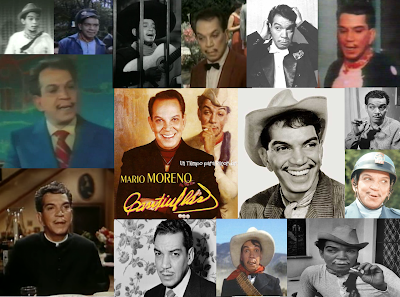 Being the budding young film buff I was in the early seventies, I was delighted to finally get the chance to see Mike Todd's then-rarely seen AROUND THE WORLD IN 80 DAYS. I was already a David Niven fan and I knew Shirley MacLaine from her failed TV series. I had fun with all the cameos in the picture, too, but the one person who stole every scene he was in...was Cantinflas!

"Who?" I remember asking myself. Never heard of him. But he was very funny and had a seemingly effortless way of making a moment his throughout this all-star roadshow event. Eventually I saw another film with Cantinflas--PEPE. It wasn't very good and I couldn't figure out why. Oh, well. In those pre-Internet days, it wasn't always easy to get information on performers so I chalked it up to the guy making two movies, one a huge hit, the other a big, career-killing flop. Little did I know.

Today, August 12th, would have been the 100th birthday of Mario Moreno, "Cantinflas." In Mexico, he came to be regarded as a cultural icon and his birthday is being celebrated in month-long celebrations!

Sometimes referred to as the Groucho Marx or Charlie Chaplin of Mexico, no less than Chaplin himself was said to have called him flat-out the greatest comedian alive.

In a film career lasting 45 years, the personable actor developed a character that represented the lower class, the downtrodden, the underdog...much like Chaplin's tramp character. Recently, after more than 35 years since I first discovered his only two US films, I finally had the opportunity to view 9 of his other films starting with an amazing, hilarious version of THE THREE MUSKETEERS. His style at his best, with a sly smile and unapologetic wordplay, reminded me very much of the later Chicano TV comedian Freddie Prinze who, I'd bet, had caught some Cantinflas performances over the years.

The name Cantinflas is shrouded in mystery but one published report has it essentially translating to "I'm annoying" and that fits the character as seen in many of his films. Early on he drank a lot and lusted after women but many of his later vehicles were styled as family features and often featured children. He did musicals, too!

Offscreen, Cantinflas wisely invested all his earnings and made a point throughout his life of giving back to the poorer peoples of Mexico. He became a folk hero as well as a film icon and was the darling of Presidents and Kings alike. His 1993 death was by all reports reminiscent of Valentino's in the 1920's.

I look forward to being able to see more Cantinflas films in the future. Happy 100th, Mario! You may not have made it but your legend continues.
Posted by Booksteve at 7:21 PM