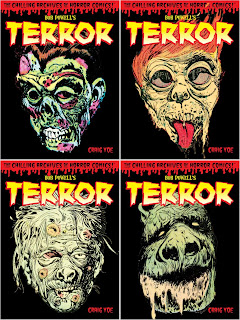 The ever-inventive Craig Yoe has devised a clever way to get potential reader input on his next book, BOB POWELL'S TERROR, before the volume is even at the printers! In fact, it can't go to the printers at all without YOUR help! Craig had a cover mockup--that still can be seen on Amazon--but while it was a cover illustrating a Powell story in the book, it was not itself by Powell. It was decided that it has to have a cover by Powell himself!

This is where you come in. If you're on Facebook, go to the Official Yoe Books page at
https://www.facebook.com/pages/Yoe-Books/157174217659112?ref=ts . If you haven't yet "liked" the page (and if you're on Facebook, you'll know what I mean by that), then do so and you immediately become eligible to cast your vote for one of the four covers seen above for BOB POWELL'S TERROR. Autographed copies of the book, due out at Halloween, will be awarded to three lucky voters. Voting runs through Friday at Midnight EDT with the winning cover to be announced on Facebook and Twitter next Monday!
Posted by Booksteve at 8:32 PM