Review: The Adventures of Spike the Wonder Dog by Bill Boggs 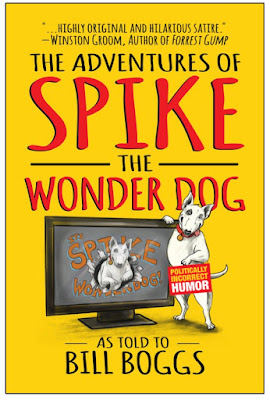 I’m more of a cat person myself, although we do also have a dog so I found myself very much able to relate to the protagonist of Bill Boggs’ hilarious novel, The Adventures of Spike the Wonder Dog.

Not that one needs any background to enjoy the book on its own merits but it helps. Author Bill Boggs is a renowned talk show host and writer going back a number of years. His track record makes him about as much an industry insider as anyone can be. Although Bill writes himself into his book as an actual character, another character, Bud, seems clearly based on him as well. It’s all very meta, you see. Bud is the owner of Spike, the Wonder Dog, a bull terrier who drops more pop culture references per page than a 1980s Stephen King novel.

Inspired by a real bull terrier, Spike is our hero, and the book’s narrator. Was it Alan Moore, or perhaps Lewis Carroll, who said if you ask your reader to accept one impossible thing, the rest shall follow naturally? The impossible thing Bill Boggs asks is that we accept that the dog is capable of narrating his own story to Bill, who wrote it all down for us to read.

And the story is a doozy! Bud is a small time TV host/reporter who becomes popular when his dog Spike gets involved in his career. Spike gets so much fan reaction that he’s made an official employee of the station where Bud works. He also appears at various local and eventually national events, while Bud is wooed away to the big time in New York City.

But fame has its perils and in Spike’s case, that involves, amongst other things, getting kidnapped to be used for dogfights! How he gets out of it and reunited with Bud makes up the last part of the book but the real fun is in how Spike describes the events in his world through his own bizarre mix of pop culture and canine sensibilities. At first it’s a bit jarring to have him telling the reader about his ancestors, whom he couldn’t possibly know about, or quoting characters from some old TV sitcom he couldn’t possibly have ever seen, or cared about if he had, even if dogs paid attention to sitcoms. With a non-stop barrage of such thoughts from our four-legged friend, though, one quickly gives up any questioning and just accepts that Spike somehow is exceptional enough to just KNOW all the things he talks about. 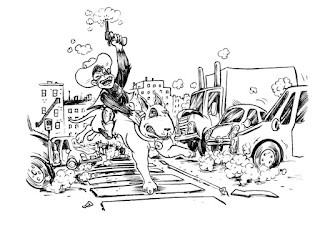 Other characters come and go, and sometimes come again, often parodies of some of the more vacuous show business types that surely our author has run into many times in his career. My favorite is Ike “I Got Money” Piles, aka “Money Piles,” a pro boxer turned millionaire who loves to throw his money around in any and all ways, no matter how ludicrous, impulsive, or impractical those ways might be. Money takes a liking to Spike from their very first meeting in a TV green room and is frustrated when Bud won’t sell him at any price! Bud does, however, take advantage of some of Money’s drugs and women.

Oh, did I mention that The Adventures of Spike the Wonder Dog is VERY politically incorrect? It’s dirty, racist, misogynistic, and whatever else might qualify it for an NSFW rating. But it’s FUNNY! It’s not in any way being mean-spirited, just unashamedly and unabashedly non-PC.

As far as the writing, the only thing even close to a complaint I have about the book is that it feels…well…written. As much as we’re meant to buy that Spike himself is narrating his adventures, I can sense Bill taking his sweet time to find just the right words here or come up with just the right expression there. Not a bad thing because he succeeds admirably. Just an observation.

Along the way, there are lots of digs at various over-the-top celebrity types, lots of veiled social commentary on the excesses of the pre-pandemic world, and lots of dog poop jokes. If you’ve ever had to clean up after a dog you loved, you’ll split your sides laughing at all the messes Spike has to have cleaned up by the end of The Adventures of Spike the Wonder Dog. Read it to your own canine pals but don’t let it give them any ideas!

Excitement, intrigue, mystery, romance, and most of all, humor. I literally LOL'd at this book more than any book in recent memory.