It was 40 years ago today! On June 18th, 1980, I entered show business for the first time. The Ohio River Swim Club was the comedy group I had joined in Cincinnati earlier in the year. Members came and went but we had settled down (for a while, at least) to 8 folks—Pat (our founder), Alex, Mindy, Cordelia, Ed, Joe, Judy, and myself, all of whom had been there since the first meeting. Alex, Pat, and I wrote sketches and we met at various members’ houses once or twice a week to rehearse our material.

Pat had arranged our first gig, at a trendy bar in Covington, KY that just happened to be at the opposite end of the alley from the apartment house where I lived, age 21, with my parents. Recently I found the diary I kept during that period. Just in case we became famous, I wanted to be ready to write our book. Sadly, that never happened. I always say we did one club show, one live show on Cincinnati’s Fountain Square, one local TV show, recorded skits for an LP that went unused, and then we broke up in a haze of pot smoke and sexual politics. The actual fact is that that was my personal experience with ORSWIC. There had been, in fact, one earlier tryout show that I did not attend, and Pat did at least one or two shows with nearly all new members after I left, taking a couple members with me to create my own brief comedy group—Central Casting.

But Coco’s was our real debut! We wanted to be different so along with our live comedy bits, we had pre-recorded some fake television commercials to run on the TV in the bar. Whoever heard of a bar with no TV? So Pat borrowed three sets and was down there all day the day of the show hooking them up along with a Betamax to run the ads we had recorded a the night before.

“June 15: It’s three days away from the show at Coco’s—we were even mentioned in today’s paper! —but we’re at least three weeks out from being well-prepared! I have no doubt that we can throw together some of our better material by Wednesday, but with no real time for last-minute rehearsals, can it work?”

Some of the titles of our mostly long-forgotten sketches:

Mansion in the Sky

The Disease of the Month Club

Those last two were written by me and I still think they were pretty good, especially Baseball Announcers, which featured Ed and Mindy. We would later perform that one before a noontime crowd on Fountain Square and then still later in our television appearance on Bob Shreve’s all-night movie show.

Overall, though, our comedy bombed before a crowd of regulars used to light jazz. The TV ads were paced wrong and hard to hear. I seem to recall one of the TVs didn’t work right, either. A rolling picture or something. Our dressing room was a tiny, smelly storage closet in a back hallway. Outside of catching a glimpse of one of our women partially undressed as we were both preparing for the next sketch, it was a nightmare.

As to the actual sketches, my glasses were in my pocket in the Vampire! sketch when Ed jumped at me as per the script, but knocked them out and nearly stepped on them. As I was only in about a third of the sketches, I was off the floor the rest of the time but I got the impression that just nobody cared. At the end of the night, Pat attempted to salvage the evening (I guess) by starting a totally random singalong of “Happy Birthday” to Paul McCartney, who turned 38 that day. Today, Paul turns 78. Time flies. Happy birthday, Paul.

By the way, Coco’s apparently didn’t think we were funny enough to pay, so a couple of our guys stole a case of beer out the back door. I didn’t hear about that until later.

The only laugh I heard all evening came consistently from one of Pat’s girlfriends who came down to watch our show. I had met her just before the show started. Her name was Lisa. Over the next few weeks, I would talk Pat into letting her in the group. Over the next few months, I would start going out with her, and when I left the group in October to form my own one-shot comedy group for Alex’s radio show, I took Lisa and Mindy with me.

So my first major (?) writing gig and my first acting gig—40 freakin’ years ago tonight! 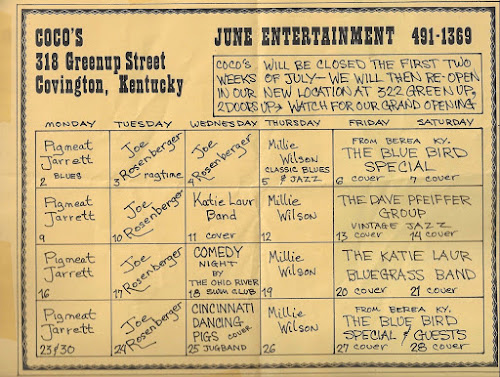