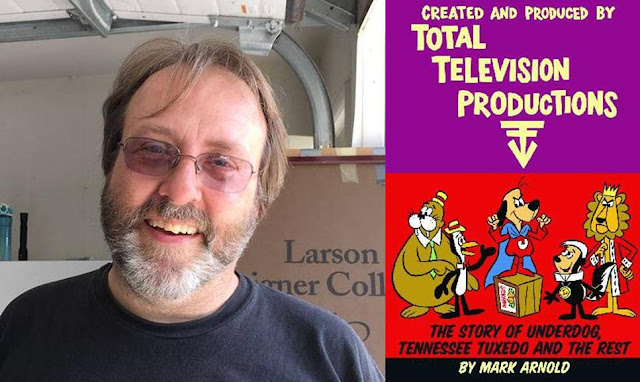 One of my favorite things about the Internet Age is STU'S SHOW. After enjoying host Stu Shostak and his guests' passionate love for classic TV and cartoons for years I was able to appear on it myself last year alongside (well, virtually at least) Kathy Coleman. A number of folks I know have also been guests over the years including Martin Grams, Mark Evanier, Jerry Beck, Herbie Pilato, and Mike Schlesinger.This week, it's the turn of writer and comics/cartoon historian Mark Arnold's turn. Mark and I both worked on Craig Yoe's ARCHIE history from a few years back and I contributed to a still-unpubkished book of his more recently. Today, he'll be talking about his book TOTAL TELEVISION PRODUCTIONS. Below is Stu's press release.

Everyone ready for another TV animation history lesson? This one comes to you courtesy of author Mark Arnold, who has written an excellent book on the story of Total Television, the company responsible for "The King and Odie", "Tennessee Tuxedo", "Underdog", "The Beagles", and many other characters, including the Trix Rabbit and the Cheerios Kid. It all started at an advertising agency that represented General Mills cereals...four guys who worked there went out on their own (after keeping a careful watch on Jay Ward and his own cartoon studio, and that's a whole other story) to capitalize on the growing TV market for animated product. They made a deal with NBC while retaining their relationship with General Mills, and the rest is history...a very SHORT history surprisingly, even though their cartoons have lived on in reruns. Mark will cover the entire fascinating story and we'll read your e-mails!

http://www.stusshow.com
Posted by Booksteve at 12:30 AM