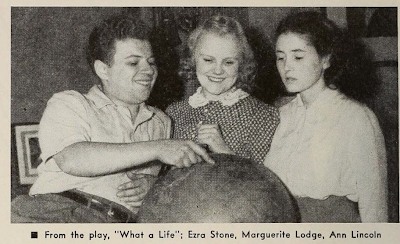 I recently ran across two photos of the late actor/director/humanitarian Ezra Stone that were taken approximately 53-55 years apart. The first shows him in the Broadway play, WHAT A LIFE, which introduced the character of Henry Aldrich which Ezra would play off and on for radio for about 15 years. After that, he became a prolific television director, best-known for episodes of THE MUNSTERS, LOST IN SPACE and Diana Rigg's failed MTM-style seventies sitcom (his favorite according to him).

The second is he and I going over the script for an ALDRICH FAMILY episode in which we both appeared, he returning to the role he made famous in later years at various nostalgia events. 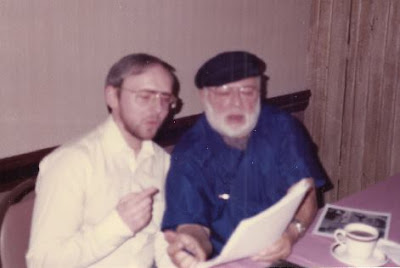 Posted by Booksteve at 8:27 PM