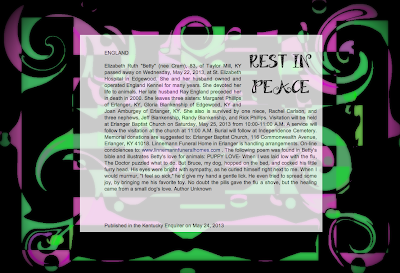 Just a personal moment if I may. My oldest cousin, Betty England, died this week. The funeral is tomorrow. Since my parents had me very late in life and my Dad's sister had kids very early, Betty, although age 83, was in the same generation as myself. One of my best memories of her was a time in the early seventies when she called my Mother and asked what I'd like for Christmas that year. My Mom told her I'd really been wanting the then-new Who album, WHO'S NEXT. So Betty bought it for me in spite of the fact that she professed to being offended by its cover!